Writing is not a muscle I have stretched very much recently. This is mostly because I have been busy stretching puzzle construction muscles instead.

Last year, I mentioned that I had been writing less because I was spending more time writing puzzles for puzzlehunts. This January, the team I was on won MIT Mystery Hunt, the biggest puzzlehunt of the year. One of the rules of MIT Mystery Hunt is that if your team wins, then your team writes it next year, and it’s this tradition that keeps the hunt going. There’s always a team going for the win to get the chance to write a Mystery Hunt.

It’s also true that after doing so, they usually don’t try to win again anytime soon. See, people don’t quite understand how long it takes to write Mystery Hunt. When I told my parents we won and had a year to write hunt, they said, “oh, a year, there’s no need to rush.” Meanwhile, last year’s constructing team started by saying “Congrats on winning Mystery Hunt! You are already behind.” I deliberately did not sign up for any leadership roles but I’m still spending about 10-20 hrs/week on Hunt stuff.

When you work in research, they say you carve out time for your hobbies, or else your research will take over everything. But what do you do when your hobbies take over time from your other hobbies? Boy do I not have a great answer to that right now. I don’t expect winning + writing MIT Mystery Hunt to be a regular activity for me, so I’ve been treating this year as a write-off for blogging. There should be more afterwards. At minimum, I’ll write a post about Mystery Hunt.

I finally got that post about My Little Pony done! Listen, that post was a struggle. I’m pretty happy that it came together, and am at peace with where I am with respect to the fandom. (Following very little, but still following.)

Also, some papers I worked on came out, most notably PaLM-SayCan. I’ve been thinking more about AI trends recently, probably because I went to EA Global. It’s interesting to see-saw between people who think AI safety doesn’t matter because transformative AI is too far away, and people who think it’s 20% likely to happen in 10 years and the default outcomes will be profoundly bad. My feelings on this are complicated and I’ll try to write more about it at some point, but I would sum them up as, “sympathetic to people with short AI timelines, not sure I’m on board with what they want to do about it.”

Normally, I include word count of previous posts, but I’m deciding I’m no longer going to track that data. I feel doing so is promoting the wrong impulses. I would rather write concise posts that take a while to edit, rather than longer posts that ramble more than they need to. I try to make every post concise, and in the past I think word count was a reasonably correlated measure of my writing output, because I had similar standards for all posts. But more recently, I’ve given myself more wiggle room on topics, in the name of “done is better than perfect”, so word count no longer matches quite as well.

Instead, I will just track post count. I wrote 7 posts this year, two fewer than last year.

I spent 99 hours, 30 minutes writing for my blog this year, about 40 minutes less than last year.

Now for context, 74 hours of that were in the 5 months before MIT Mystery Hunt, and 25 hours were in the 7 months after, so it’s pretty clear where the time went.

Here’s a review of all the posts I said I might write last year.

Part of the reason this post never happened is that I wanted to touch on the concept of legibility. To do so, I figured I should read Seeing Like a State directly, since it was the book that popularized the idea, and it would be better to go to the source rather than trust everyone’s 2-sentence summary. Then I never finished Seeing Like a State because it’s a bit long and not written to be an easy read.

This is why people just read Twitter summaries of papers and skip the paper itself. How else would anybody get work done?

Shooooooooot. Look, Gunnerkrigg Court is sick. It is still one of my favorite comics of all time. But, I’m not quite as hype about it as I was when I first archive binged it in 2015, and I’ve forgotten the things I planned to say about it. The right time to write this post was around 2017, but I didn’t, and now I’m not in the right headspace for it.

I’ve come to realize that I like writing about things that I expect other people not to write about. I like novelty, I like feeling like I am contributing new ideas to the conversation. It is my way around the “my cake sucks” problem. 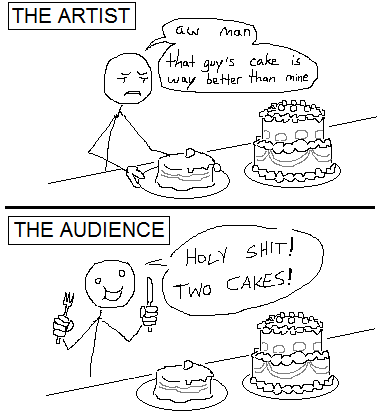 What you’re supposed to do is tell yourself that the audience is not nearly as judgmental as you are. They just want cake! Instead of telling myself that, I try to create super wild novelty cakes that are harder to compare to anything else.

This is a bad solution and I should get myself to be more of a two cakes person. But! Who else is going to write about Dominion or Dustforce’s r/place struggles? Sometimes a story has to be told. There is room for the occasional novelty cake.

Speaking of Dustforce, this is a new one I’m adding to the queue. Dustforce is a hard-as-nails platformer, and has a special place in my heart. Most of my ride-or-die games are from my childhood and nostalgia blinds me to their flaws. Dustforce got its hooks in me in college, in a way few games have. It is both really cool and really dense - I entirely understand why people bounce off this game, but there’s a fan community that has been playing the game and organizing Dustforce events for 10 years. There’s a reason why.

I mean, yeah, this is happening, one way or another.