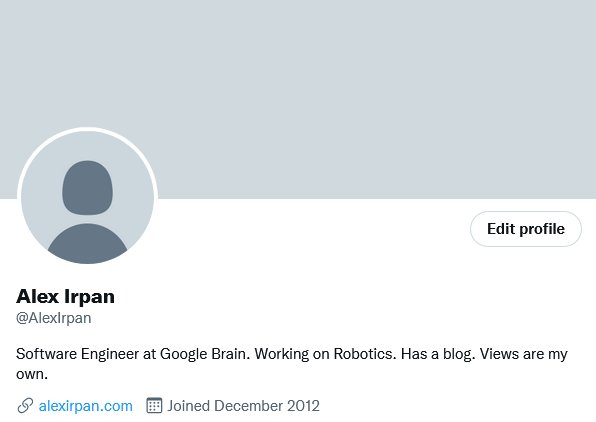 My Twitter profile is not set up to pull people in. If anything, it is deliberately adversarial.

All those groups agree that Twitter is awful for having nuanced conversation, but people post there anyways. When I try to probe why, the common reply is that Twitter forces people to get to the point. I can see the logic, I’m certainly guilty of going on and on for no good reason. (I try not to! It’s hard!)

People tell me ML Twitter is worth it. Parts of it do seem good! It’s just, I have trouble trusting social media in general. I don’t have a TikTok. I know that if I set up TikTok, eventually I’ll be spending an hour a day genuinely having fun watching random videos, with a small voice asking if I could be doing something else instead. It’s not that I wouldn’t get joy out of it, it’s that I’d get joy that aligned me towards the kind of person TikTok would want me to be. Facebook and Reddit already did that to me. There is only so much time for dumb stuff.

The issue, then, is that there’s real benefit to hanging around ML Twitter. It is not just dumb stuff. The medium makes it easier to find the hot takes where someone deliberately challenges accepted wisdom, which is where interesting intellectual thought happens. It’s easier to promote a paper on Twitter than it is to promote it at a conference - if anything, the two go hand-in-hand. The memes are specific enough to be excellent.

It’s quite likely that I’m losing out on both ML knowledge and career equity by not being more active on Twitter. But do I want to become more like the person Twitter wants me to be? I’m not sure people understand how good recommendation systems have gotten and how much work goes into improving them.

“Try it for a bit, you can always change your mind later.” And yet I feel like if I try it enough to give it a fair chance, then it might be too late for me.