Every April Fool’s, Reddit runs a social experiment. I’ve always had fun checking them out, as part of my journey from “people are too hard, I’m just going to do math and CS”, to “people are hard, but like, in a really interesting way?” The shift was realizing that culture is a decentralized distributed system of human interaction, and Reddit’s April Fool’s experiments are a smaller, easier to understand microcosm of that.

Some have been pretty bad. Second was trash. I know people who liked The Button a lot, but r/place is easily their most popular one. Each user can place one pixel every 5 minutes in a canvas shared by the entire Internet. Alone, it’s hard to do anything. But working together, you can create all kinds of pretty pixel art…that can then get griefed by anyone who wants to. It’s all anarchy.

I didn’t contribute to r/place in 2017, but for the 2022 run I figured I would chip in a few pixels to the SSBM and My Little Pony projects, then mostly spectate. And yeah, that’s how it started on the first day! The MLP subreddit put out a Rainbow Dash template on March 31, and when I checked in, I saw their location was right in the path of the ever-expanding Ukrainian flag.

The irony of people fighting for r/place land while a real-world land grab was going on was not lost on me. I deliberately skipped joining the coordination Discord, because I had no interest in getting involved more than the surface level, but from what I heard, the MLP r/place Discord decided to play the long game. They believed that although the Ukraine flag was taking over space now, and although most subreddits supported Ukraine in the Russia-Ukraine conflict, the flag owners would eventually face too much pressure and would have to make concessions to allow some art within its borders. The MLP Discord wanted to maintain their provisional claim formed by Rainbow Dash’s torso, to be expanded later. They were correct that the Ukraine flag would make concessions. They were wrong that My Little Pony would get to keep it. There’s a whole saga of alliance and betrayal there, which eventually forced MLP to change locations, but I did not follow it and I’m sure someone else will tell that story. The one I want to tell is much smaller.

For about 7 years, I’ve been a fan of Dustforce, an indie platformer. When people ask what video games I’ve played recently, I always tell them I’ve been playing Dustforce, and they’ve always never heard of it. It’s one of my favorite games of all time. Maybe I’ll explain why in another post, but the short version is that Dustforce is the SSBM of platformers. Super deep movement system, practically infinite tech skill ceiling, levels that are hard but satisfying to finish, and a great replay system that always gives you tools to get better. It’s not very big, but it had representation in 2017’s r/place.

Lots of big communities have little interest in r/place, and lots of little communities have outsized presence in r/place. You don’t need to be big, you just need a subset with enough r/place engagement and organizational will. Dustforce is tiny, speedrun livestreams get at most 30 people, but we made it 5 years ago. I believed we could totally make it in 2022. The Dustforce Discord talked about doing something for r/place, but hadn’t done anything, so I made a pixel art template in hopes it would get the ball rolling. 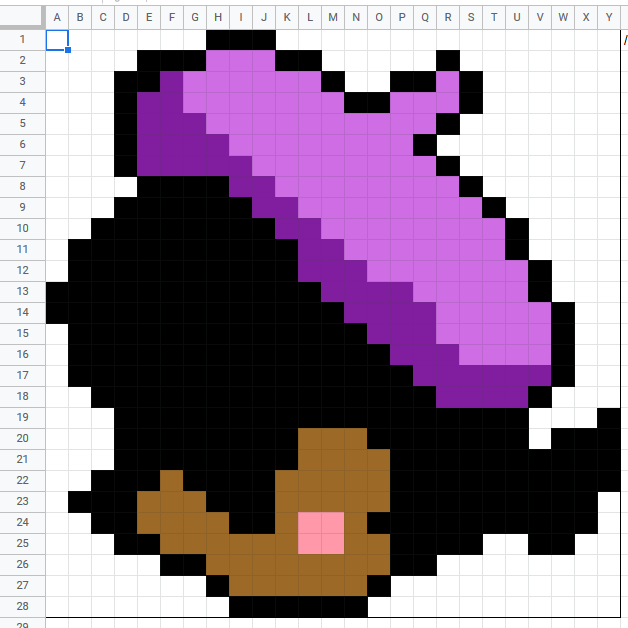 Dustkid, a character in Dustforce. We’ll be seeing her a lot.

Pixel art is not my strong suit. To make this, I downloaded the favicon for dustkid.com, then translated the pixels to the r/place color palette. After scanning existing r/place pixel art, I realized our target image was somewhat big for our community size, so I prepared a smaller version instead. Any representation is better than none. 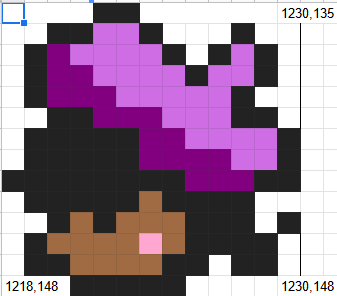 I wasn’t interested in organizing r/place for Dustforce long term, but I’m a big believer that you get movements going by decreasing the initial effort required. Having a template gives a way for uninterested people to contribute their 1 pixel. I’m happy to report this plan succeeded! Although, it was a long journey to get there. To be honest, this is primarily the work of other community members who took up the mantle I started.

We didn’t want to take pixels away from established territory. I don’t think we could have even if we wanted to. Our best odds were to find a small pocket of space that didn’t have art yet. After some scouting, I proposed taking (1218, 135) to (1230, 148), a region right underneath the Yume Nikki character that looked uncontested. I also argued that even though we would mostly coordinate over Discord, it was important to make a post on the r/dustforce subreddit. Since r/place was a Reddit event, we needed a land claim on Reddit for discoverability. With that claim made, we started placing pixels.

The beginnings of the Dustkid hat

As we continued, we noticed a problem pretty quickly. We had picked the same spot as r/Taiwan.

Someone tracked down the r/Taiwan Reddit post. Their aim was to add a flag of the World Taiwanese Congress. For Dustforce, this was baaaaaad news. Flags historically have a lot of power in r/place. Their simplicity makes it easy for randoms to contribute pixels (it’s easy to fix errors in solid blocks of color), and patriotism is a good mobilizer to get more people to chip in. We were right in the middle of their flag, and it would take up all the available free space in that section. Maybe we could have negotiated living on their flag, but I highly doubt r/Taiwan would have agreed, and no one from r/dustforce even bothered asking.

Alright, back to square one. Other people in the community proposed alternate spots, without much luck. Any spot that opened up was quickly taken by other communities or bots. By and large, people on r/place will respect existing artwork, so once we got something down there was a good chance we could protect it. The problem was that in the time it took us to make something recognizable, other groups or bots would place pixels faster. By the end of Day 2, we had nothing. All our previous efforts were run over. We were simply outmatched, and I didn’t think we’d make it.

On the last day, Reddit doubled the size of the canvas once more, saying it would be the final expansion. With a new block of free space, that expansion represented our best chance of getting something into r/place. It’s now or never.

First, the expansion had increased the color palette, so we adjusted the template to be more game-accurate. 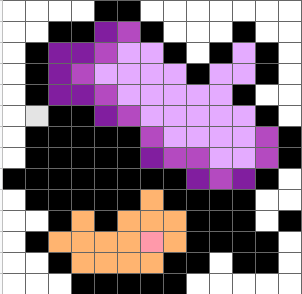 By this point I was content to leave organizing to others. They first reached out to the Celeste community, asking if we could fit Dustkid into their banner, seeing as how both Dustforce and Celeste are momentum-based precision platformers. After some discussion, they felt it would clash too much. This wasn’t entirely fruitless however - during this discussion, they invited Dustforce to the r/place Indie Alliance. It was exactly what it sounded like: an r/place alliance between indie game communities.

I joined the Indie Alliance Discord to stay in the loop, but quickly found it was too fast for me. Lots of shitposts, lots of @everyone pings, and lots of panicking whenever a big Twitch streamer went live and tried to force their will onto the r/place canvas. There were even accusations of spies and saboteurs trying to join the alliance. I never quite understood how having a spy in r/place would help things. In a real fight, there’s fog of war, it takes time to mobilize forces, and intelligence on troop movements or new weapons can be a decisive edge. But in r/place, there’s no fog of war because the entire canvas is public, people can “attack” (place pixels) anywhere they want with no travel time, and everyone knows how to find r/place bots if they want to. There’s no real benefit to knowing an r/place attack is coming, nor is there much benefit in knowing a place will be defended - by default, everything is defended.

Our eventual target was a space nearby the Celeste banner, currently occupied by AmongUs imposters. 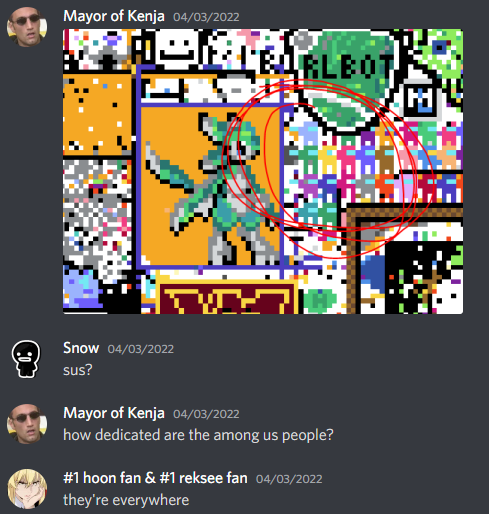 They laid out the argument: AmongUs crewmates were scattered all throughout r/place, usually to fill up space without compromising the overall artwork. Since there were so many crewmates, the odds any specific patch was fiercely defended was quite low. That meant AmongUs space looked more defended than it really was. If we blitzed the space fast enough, we likely wouldn’t face retribution, since the AmongUs people likely wouldn’t care. We went for it.

We did run slightly afoul of r/avali, a subreddit for a furry species. Our art template and their art template overlapped by 1 pixel, and we both really wanted that pixel. In a dumb parody of the Israel-Palestine conflict, they wanted both an orange and indigo border around the Avali, but our pixel threatened the indigo border, and we really didn’t like the aesthetic of having an indigo border everywhere besides that pixel.

Now, if r/avali had decided to fight, we would have lost. Luckily, we figured out a solution before it came to that. If we shifted the Dustkid head diagonally down-right 1 pixel, it would resolve the dispute. Plus, we’d be more symmetric between the Rocket League bot logo towards our north and the Mona Lisa towards our south. We let r/avali know, and did the migration.

With that, we made it! We even had time to adjust our template and fill in more space with Dustforce pixel art, adding the S+ icon we had last time r/place happened.

It was surprisingly low on drama. Everyone nearby was friendly. The Go subreddit r/baduk to our right could have conflicted, but they recognized our land claim and adjusted their template so that it wouldn’t clash. We eventually made a heart connecting the two. A Minecraft wolf invaded the space where we planned our pixel art expansion, but we found it was all created by one user (!), so we offered to adopt and relocate the wolf to a separate corner, which they were happy with. RLbot to our north even offered to give us more space, since they had abandoned their logo a while back. We never took them up on that offer, since by the time we were done tuning things in our corner, r/place had ended.

We really lucked out on our location, and were never the target of a community big enough to trample over us. The theory was that we were close to big art pieces like the Mona Lisa and One Piece, and although those art pieces weren’t looking to expand, no one wanted to challenge them and this gave us protection by proxy. Perhaps you could call Dustforce a vassal state, but I’m not sure they even care about us.

With Dustkid settled, I went back to helping cleanup My Little Pony art, which had been griefed enough that they had added a counter for “# of times we’ve rebuilt” to their template.

(It’s the 22 on the middle of the right border, just above Rarity)

I also helped a bit when someone from the Indie Alliance got raided. But that was small fry, compared to the work beforehand. I was happy to be done with r/place. It really took up more of my attention and time than I expected it to.

There’s this old quote from The Sandman. “Everybody has a secret world inside of them.” Nowhere is that more true than r/place. The adventure to put a 15x15 Dustkid head was just one piece of the overall 2000x2000 canvas. There’s all sorts of complexity, 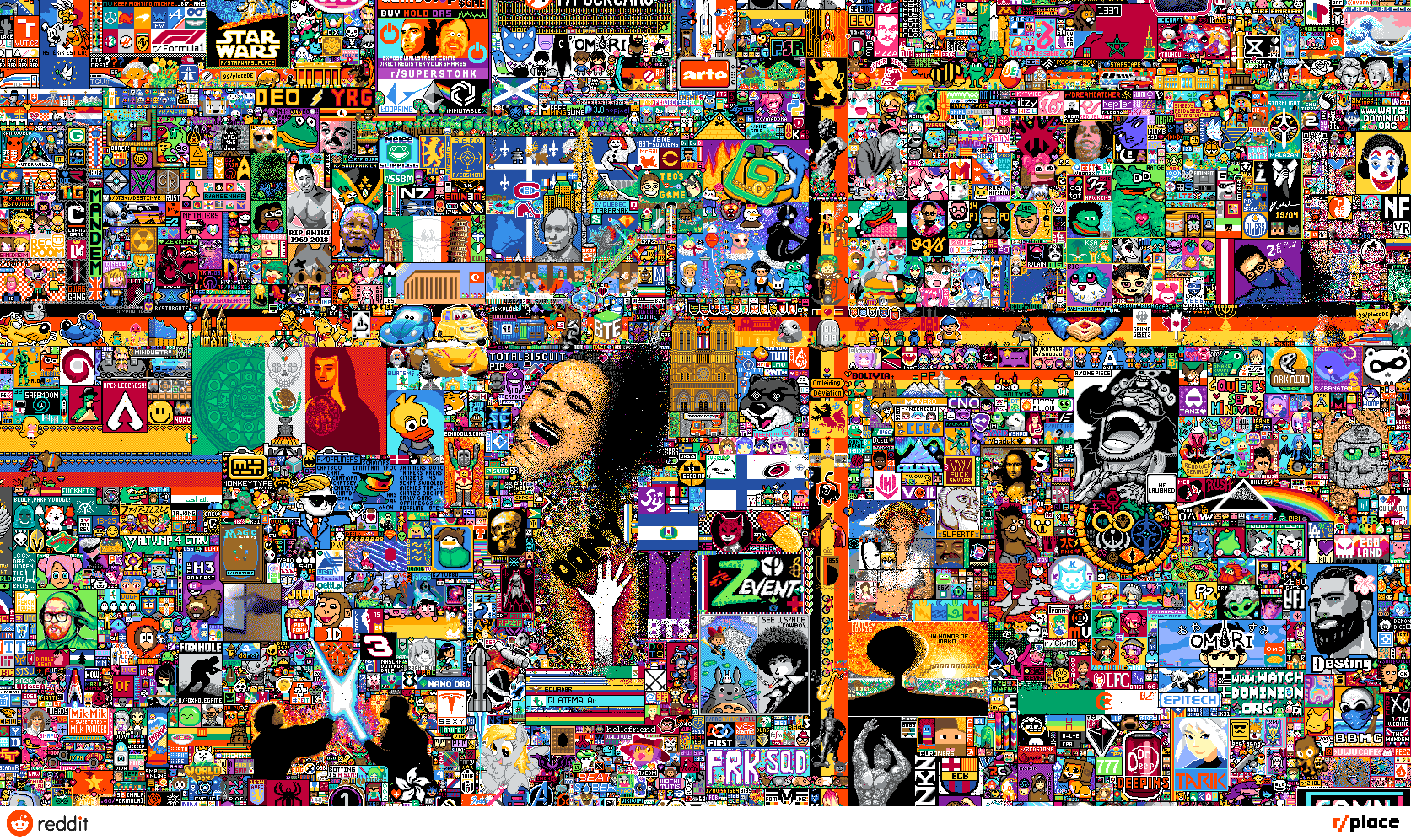 as you take in the bigger picture. 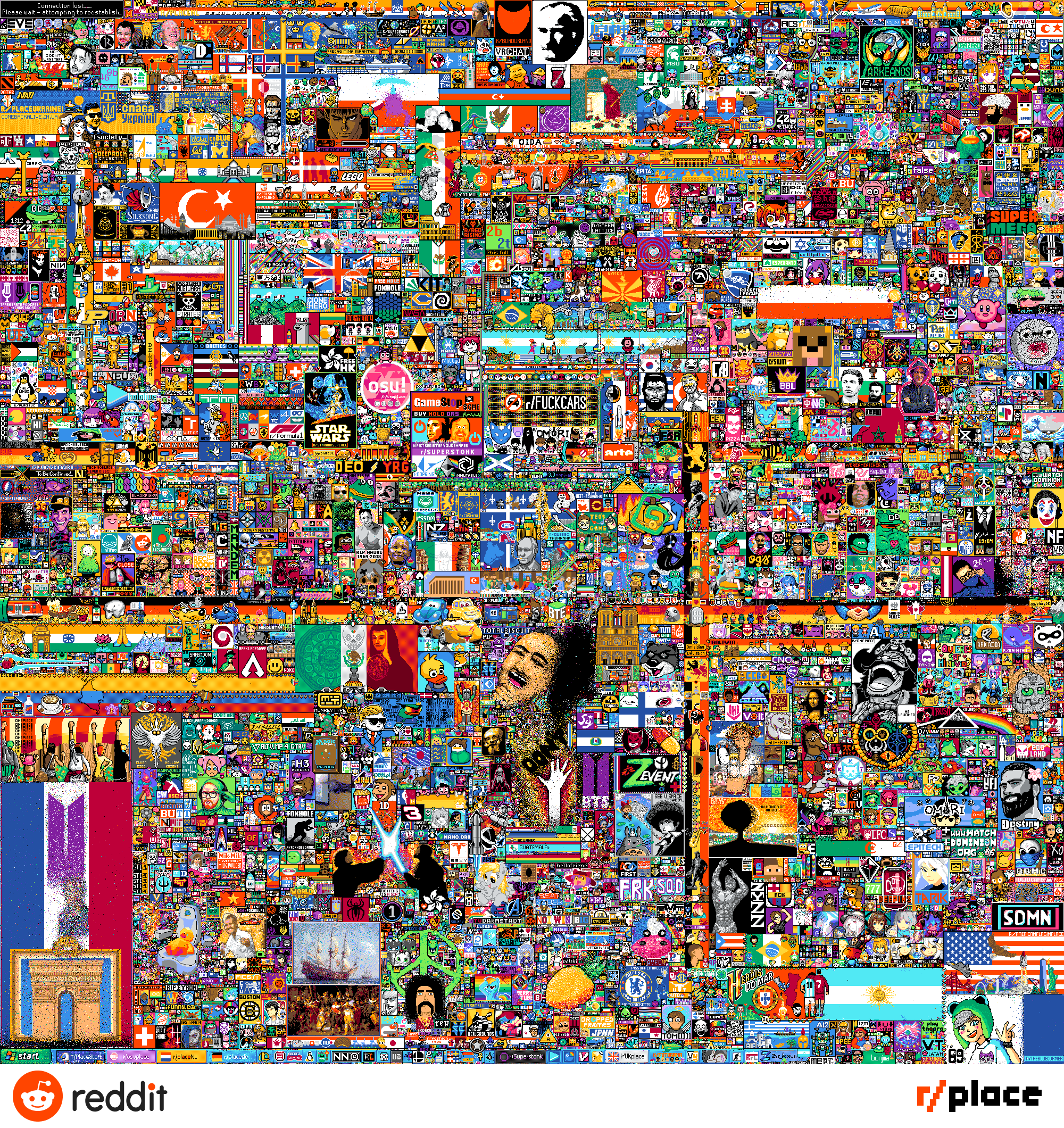