DALL·E 2 was announced in April of this year. As a rule, by the time the paper is public, the model probably existed a month ago, often more.

It’s been swiftly followed by Midjourney, Stable Diffusion, and Imagen, all developed simultaneously. If you are new to ML, this is pretty common. Although you personally will miss some good ideas, people working on the relevant problems will notice and develop the same good ideas within a few months of each other. My understanding is that diffusion was building up steam, then classifier-free guidance was developed, and that was the key piece that unlocked the improved generations we’re seeing today. I highly recommend Sander Dieleman’s post if you want to learn more of the math.

In the months since, image generation has gone from a thing some people talked about, to something everyone was talking about. I’ve seen people say “this is a DALL-E ass looking movie poster”, in a bad way. I’ve seen artists preach AI asceticism, meaning “do not use image generation tools, opt out of letting your art get used in these tools if they give you the choice”. I read a post from someone who discussed AI asceticism, and then acknowledged that they could not do it, the image generation was too fun to play with. They were part of a Last Week Tonight episode. Art sites have had to decide whether they would allow computer generated images or not (most have decided “not”, either because they wanted to be a place for human artists, or because people were generating too much content to moderate.) A person won a state fair art contest with Midjourney, in a way almost perfectly designed to be controversial.

This still feels crazy to me? People have normalized that it is possible to get high quality language-guided image generation really, really quickly. In another world, perhaps it would end there. A lot of wild stuff has been happening. But if I had to estimate where we were on the technology development curve, I’d say we’re about here: 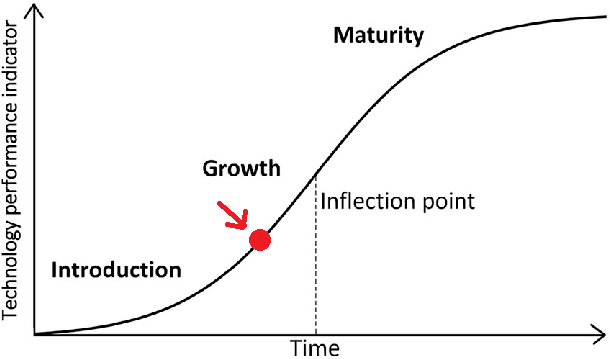 I believe this for two reasons.

Generative modeling in the past few years were primarily ruled by GANs. The developments in image generation are based not on a better GAN, but on diffusion methods, an entirely different paradigm for viewing ML problems. Anytime you have a new paradigm, you should expect a lot of people to try it on their problem, and then watch some of those people succeed and breakthrough on problems that used to be hard.

More importantly, diffusion is a very general idea. The current AI news has been powered by images, but nothing about diffusion is image centric. It’s just a generic method for learning a model to match one probability distribution to another one. The machine learning field is very practiced at turning life into math, and there’s more to life than just images.

When AlphaGo first beat Lee Sedol, I said that it might be the end of turn-based perfect information games - all of them. Go was mountain top, and although AIs wouldn’t exist for other games, no one would doubt that it was possible if someone put a team on solving it.

Something similar is starting to feel true for problem domains where there is enough human data on the Internet. Before people yell at me: I said starting! I think there’s only a few domains where we actually have enough human data at the moment. If pure data quantity was the only factor that mattered, RL agents playing Atari games should have taken over the world by now.

What matters right now is how much human output you can get for your problem domain. When I read through the paper for Whisper, a speech recognition system, I found this section especially interesting.

Many transcripts on the internet are not actually human- generated but the output of existing ASR systems. Recent research has shown that training on datasets of mixed human and machine-generated data can significantly impair the performance of translation systems (Ghorbani et al., 2021). In order to avoid learning “transcript-ese”, we developed many heuristics to detect and remove machine-generated transcripts from the training dataset. Many existing ASR systems output only a limited subset of written language which removes or normalizes away aspects that are difficult to predict from only audio signals such as complex punctuation (exclamation points, commas, and question marks), formatting whitespace such as paragraphs, or stylistic aspects such as capitalization. An all-uppercase or all-lowercase transcript is very unlikely to be human generated. While many ASR systems include some level of inverse text normalization, it is often simple or rule-based and still detectable from other unhandled aspects such as never including commas.

As data-hungry as the Whisper model is, it is still better to exclude certain kinds of data from its training set. It is not just enough to have a massive pool of data, you still need some management to make sure it is of the right form. Kind of like how swimming pools are not just piles of water, they get chlorinated and processed to remove germs.

Aside from those, I actually don’t know of much else that fits my mental model of “literally billions of people have put this content online for free”. There are lots of effort-heavy datasets for different problem domains (protein folding, theorem proving, GoPro datasets, etc.). These were created with purpose and intention, and that intention limits how big the datasets can be. Some of those will lead to cool things! I don’t think they’ll lead to fundamental floor raising of what we believe ML models are capable of. The problem the authors of Whisper needed to avoid was that you don’t want to learn “transcript-ese” instead of Japanese, and I’m not yet convinced that current models are good enough to cross the transcript-ese barrier and learn from their own outputs. Doing so could be AI-complete.

Even so, if you assume the improvements stop there, and you just have better image generation, audio generation, and video generation, that still covers…like, a really heavy fraction of the human experience? The submission deadline for ICLR just passed, meaning all the ML researchers are putting their conference submissions on arXiv, and there is some wild, wild stuff branching off from diffusion models as-is.

There is a 3D asset generator based on NeRF + using Imagen as a loss function, letting you bootstrap from 2D text-to-image into 3D data.

There is a video generator that’s also bootstrapping from a 2D image model to build up to video generation, since this seems to work better than doing video diffusion straight.

This may be early, but diffusion looks like it’s going to go down as a ResNet-level idea in how it generally impacts the development of machine learning models. The jump seems pretty discontinous to me! I know this stuff is hard, and there are cavaets to what works and what doesn’t, and you just see the successes, but I still think there isn’t a reasonable way you can say, “ah, yeah, but this is all a dead-end, it’s going to hit a wall soon”. Right now the runway of “make the obvious next improvement” seems at least 2 years long to me, and that’s a lot of time for better models. As a comparison, 2 years ago is about when GPT-3 came out, and language models haven’t stopped yet.

It’s research level now, but this stuff is going to hit the wider public consciousness in about a year or two, and people are not going to be ready. They just aren’t. Maybe it will be just as easy to normalize as text-to-image was, but I expect a lot of domains to get disrupted, and for every five problems where it’s harder than expected, there’s going to be one where it’s easier.

If I see anyone complain about having to write a Broader Impacts section for NeurIPS, I’m going to be pretty upset. ML is crossing some key quality thresholds, and writing that section is not that hard! If you do find it hard, I’d take it as a sign that you should have started thinking about it earlier.