I plan to edit in puzzle links later.

After going in-person for the past 2 Hunts, I decided not to fly-in for the 2018 Hunt. The short explanation is that I always procrastinate on flights, and at the time I needed to make a decision, work was very, very busy. There were several Code Red, “implement this or nothing is possible” issues.

The issue wasn’t that I didn’t have time. It was that I’d have to take days off on short notice, which would have thrown a bunch of time estimate off. If I had planned Hunt ahead of time, and made sure everyone knew I would be out for certain days, I would have flown in. Lesson learned: hobbies don’t just fall into your life, you make time for your hobbies.

I hunted with ✈✈✈ Galactic Trendsetters ✈✈✈ again. I suppose at this point, it’s my home team, thanks to connections from the high school math contest network.

If you want to avoid spoilers, you should stop reading now.

I think Hunt was pretty good! I was worried that a team would finish somewhat quickly, given the warning that Hunt would be shorter than previous years, and that it would be best if your team wasn’t too large. My expectation was that it would be fewer puzzles, team sizes wouldn’t change, the winning team would solve Hunt pretty quickly, and then the rest of us would get there along the way. The initial Emotions round did nothing to disprove this. It turned out that the Island puzzles were a lot harder, big teams had decided to split ahead of Hunt, this was still MIT Mystery Hunt and it was still going to be A Journey.

Number of puzzles isn’t the only metric that matters in Hunt. Unlock structure matters too. If it’s harder to unlock a bunch of puzzles, it’s harder to parallelize solving, which slows down Hunt and leads to bottlenecking behavior. The easy puzzles get solved instantly, leaving just the hard ones. It’s especially bad for large teams, because the odds you get to see a puzzle before it gets solved just gets vanishingly small.

On the flip side, if it’s too easy to unlock a ton of puzzles, then small teams can get overwhelmed, and big teams just steamroll everything. It’s all a bunch of trade-offs.

Galactic reported 60 people for the scavenger hunt this year, and it definitely felt like we were gated on unlocks. This was especially strong in the Games round, which was our first island. The unlock structure was linear, until you unlocked a puzzle close to the center. It quickly became clear that if we got stuck on any single puzzle, it would potentially block unlocks for a ton of other puzzles. And in fact, that’s what happened for us: both The Year’s Hardest Crossword and Sports Radio were stuck for a while, so we had to rely entirely on solving the linear puzzles up to All the Right Angles before it felt like we were out of danger. In general, I would have liked to see more redundancy in the unlocks for that round.

On to specific stories!

In the days leading up to Hunt, I made a bingo generator. It seemed like a cute idea, and the site was entirely static, which made it easy to piggyback off Github pages. Unfortunately, I didn’t get a Bingo. I needed “Puzzle is unsolved by the end of Hunt” to get there, and we self-torpedoed my chances by using our spare Buzzy Bucks to buy solutions to all remaining puzzles.

Most recent Hunts have a free answer system that lets you sweep up unsolved puzzles. I’m not sure a zero-solve puzzle is even possible in a modern Hunt.

This was my 6th Mystery Hunt, and I continue to feel like I’m bad at puzzles. I historically have a bad track record at getting a-has. Here’s my main contributions every hunt.

The way this works out is that I basically never get to do “hero-solves”, because other people hero-solve faster than I do. I feel more like the grease that gets all the other cogs to keep spinning. But, who knows, maybe I underestimate my solving skills.

I spent my Friday morning to afternoon trying to do work while spectating our progress. This was a terrible idea, because I didn’t do much work, and also didn’t get to work on puzzles. I ended up skipping all of the Emotions round. The extent of my contribution was opening the metas, looking at partial progress, and thinking, “oh yeah that’s definitely right.” For the Fear meta in particular, several people on the team had gotten suspicious when the Health & Safety Quiz was mailed to everybody, and got very suspicious when HQ sent a deliberately vague reply as to whether it was a puzzle or not. So when we saw Fear’s flavor text, we got the idea pretty quickly.

Our unlock order was Games, Sci-Fi, Pokemon, Hacking. The first two were by popular vote. By the time we unlocked the third island, it was 1:30 AM on Saturday. Local people didn’t want to do on-campus puzzles at night, and remote people didn’t want to unlock on-campus puzzles because they wanted to have puzzles to work on. This ended up backfiring a bit, because on Saturday night, the only puzzles open were longstanding Games puzzles and physical puzzles, which left little for people who weren’t interested in either. At least it gave me an excuse to go to bed.

I spent a bunch of time on All The Right Angles. One nice thing about crossword-like puzzles is that you can contribute even if you only figure out a few clues. We got the billiards and substituion gimmick pretty quickly, but had trouble getting SIXTUS to fit in our grid. Eventually, someone figured out that “LOUIS IX isn’t LOUIS 9, it’s LOUI6, the cheeky bastards”. After filling in the grid, we drew the billiard path, and someone joked we should call in EIGHT because the path was a figure eight. That gave people some bad flashbacks to SEVEN WONDERS from last year. Luckily, the answer was not EIGHT.

Walk Across Some Dungeons 2 was fun. I was on it instantly, but I moved to other puzzles when I realized I was bad at Sokoban.

I contributed basically zero to the Sci-Fi round. The only thing I did was throw backsolve attempts at the metas now and then.

In the Pokemon round, the first puzzle I worked on was The Advertiser. We figured out they were all TMs, identified them, and then were told it was a metapuzzle. We solved it with 2 answers.

The first regular puzzle we solved in Pokemon was 33 RPM, so Mix Tape was the puzzle where we discovered the evolution gimmick, which was pretty great. 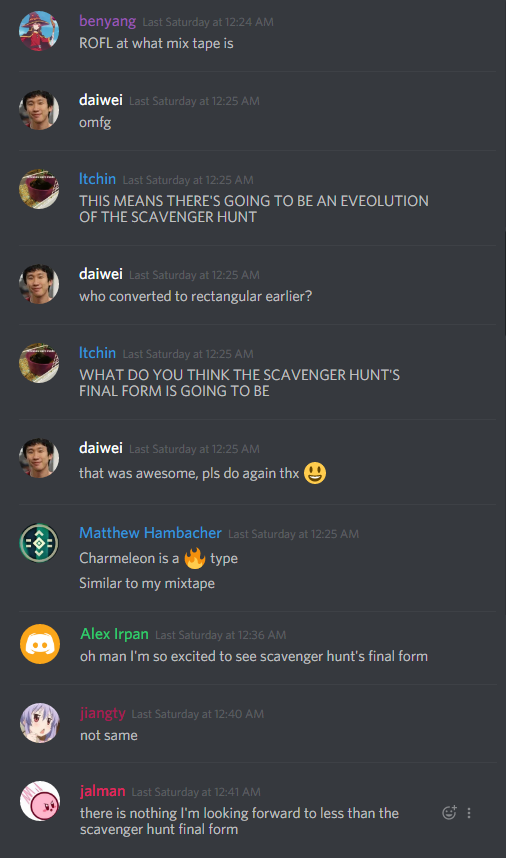 I puzzled with another remote solver, and he was just getting so mad at Mix Tape. It was past midnight, and we had the audio, but the quality was bad. The songs weren’t Shazamable, which was just all kinds of pain. Our image pipeline was “take the spiral image” \(\rightarrow\) “unroll into a rectangular image” \(\rightarrow\) “turn into audio”, but small errors accumulated. In retrospect, reading directly from the raw spiral would have been better.

When Twitch Plays Mystery Hunt came out, I got the impression that literally every local solver started working on it at once. As a remote solver, I unfortunately didn’t get to participate, because all the coordination was getting done in person. I did get to see plenty of memes and copypasta.

The first “intentionally left blank” puzzle we unlocked was Lycanroc, which confused us for a while. Lycanroc is literally a werewolf, so we thought we had to wait until night for the puzzle to change form. It was a sketchy theory, but we didn’t have anything else. I believe the metameta structure got figured out when somebody noticed the Fire transformation. Once we had that, we got the rest in a matter of minutes. This led to an amusing statistic: our best “solve” time was 6 seconds.

Some people on our team got very, very excited about X Marks the Spot. I didn’t work on it, but as a Euclidean geometry fan, I approve.

The Scouts was the last meta we solved in the Pokemon round. We only solved it after the metameta, when people working on Hacking were looking for things to do. I made a comment about “badges” early on, but it took us a while to discover the puzzle titles were relevant.

When I woke up on Saturday morning, I saw in the chat that Pestered was a Homestuck puzzle. I thought I missed it, but turns out it was stuck on extraction. I didn’t figure the extraction either, and it was the final puzzle we bought. We got tripped up on two things. One, we were certain that we needed to use the DNA pairs of the trolls again, using the zodiac signs to get an ordering. Two, the last page of The Tech from the Thursday before Hunt had horoscopes that looked a lot like puzzle data. Turns out it was a massive, unintentional red herring. I wonder if HQ was confused by our GRYFFINDOR guess.

The first puzzle I worked on in Hacking was Bark Ode. The most amusing part was easily the time where I had to mark a square as ? because I couldn’t figure out if it was a dog or not. I then looked at Voter Fraud, but didn’t do much for it, besides noting it was probably a voting systems puzzle.

I planned to work on Murder at the Asylum, but some local people were solving it at a chalkboard, which didn’t work for remote solvers. So, instead I looked at the Scout meta. Someone else made the key observation that TENDINOPATHIES was likely after a chute and overlapped with EXTEND. There was only one place on the grid that supported that, and with another location guess, we got EXOS as a partial, which was enough to solve the meta. I then worked out constraints on the 3 missing answers, got my work checked, and backsolved Murder at the Asylum before they could forward solve it. Revenge of the remotes!

That ended up being my final contribution to the Hunt. By the time I woke up on Sunday morning, we only had metas, physicals, and abandoned puzzles left. I did some work on drawing out the connectivity graphs for Flee, but that was about it. We did run into one red herring: BIOFUEL TORCH was a tool, BACKUP PLAN sounded like a punt, and EXOSKELETON was a plausible hack, which drove us to think about “Hack, Punt, Tool” for a bit. Somehow, despite never being an MIT student, I still got this reference. The fangs of MIT culture run deep…

I’ll end with a question: what do people think about after finishing a Mystery Hunt? 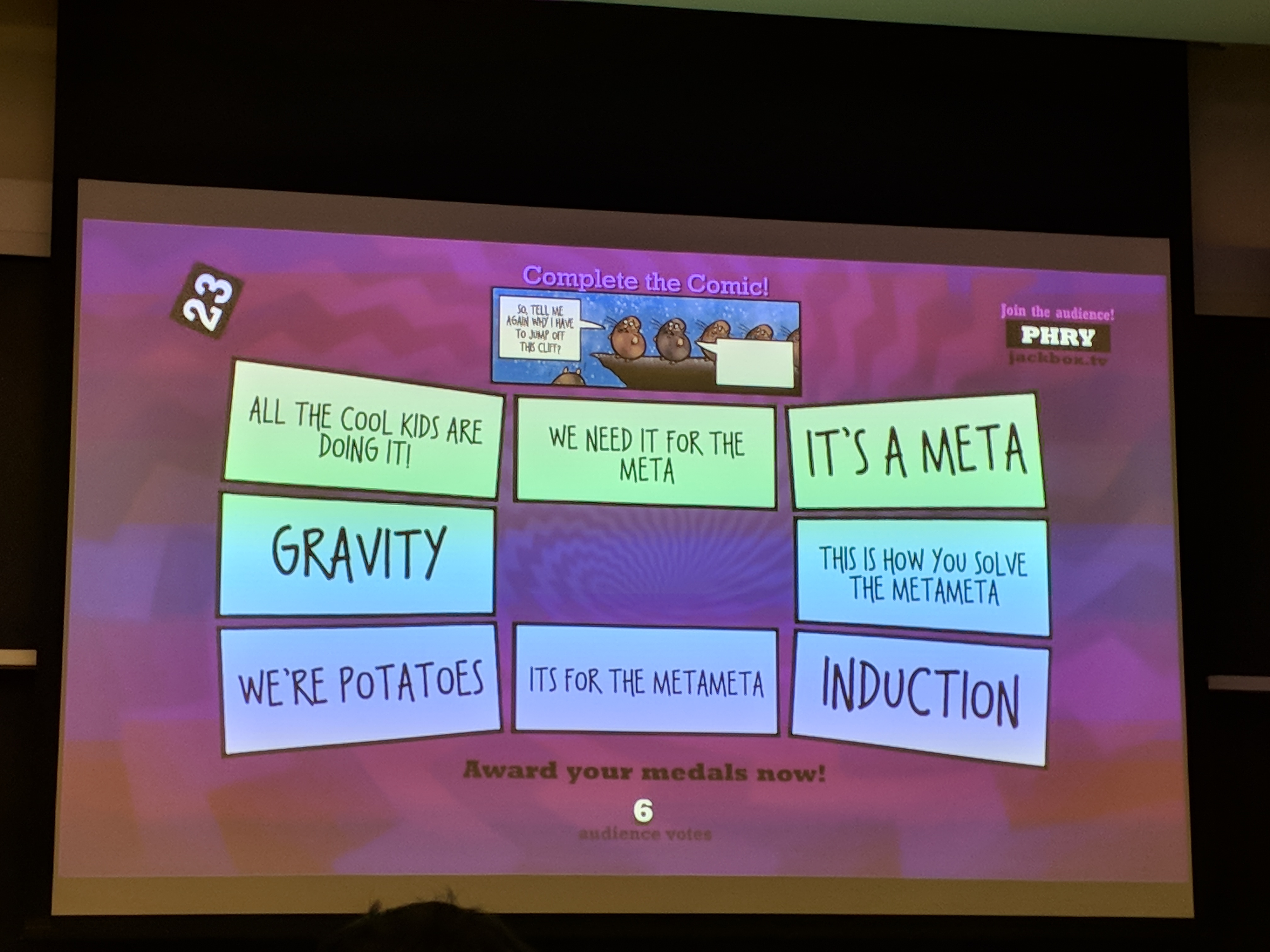 See you next Hunt! Congrats (and condolences) to Setec.

← So There I Was, Buying My Little Pony Merchandise in Italy    Deep Reinforcement Learning Doesn't Work Yet →