For Thanksgiving, my family went on a trip to Rome. It was pretty cool! There’s something special about visiting a city that is literally thousands of years old. It is one thing to read about the Renaissance, and it is another thing to realize that the sculpture in the town plaza predates the Declaration of Independence by over 300 years, and it’s right there.

The one downside is that although my parents liked the scenery, they weren’t the biggest fans of Italian food. They didn’t dislike it, but, well, let me put it this way: the only restaurant we visited multiple times was a Chinese restaurant.

But I digress! During the trip, we visited a supermarket to buy some fruit. While there, a family member pointed out these boxes. 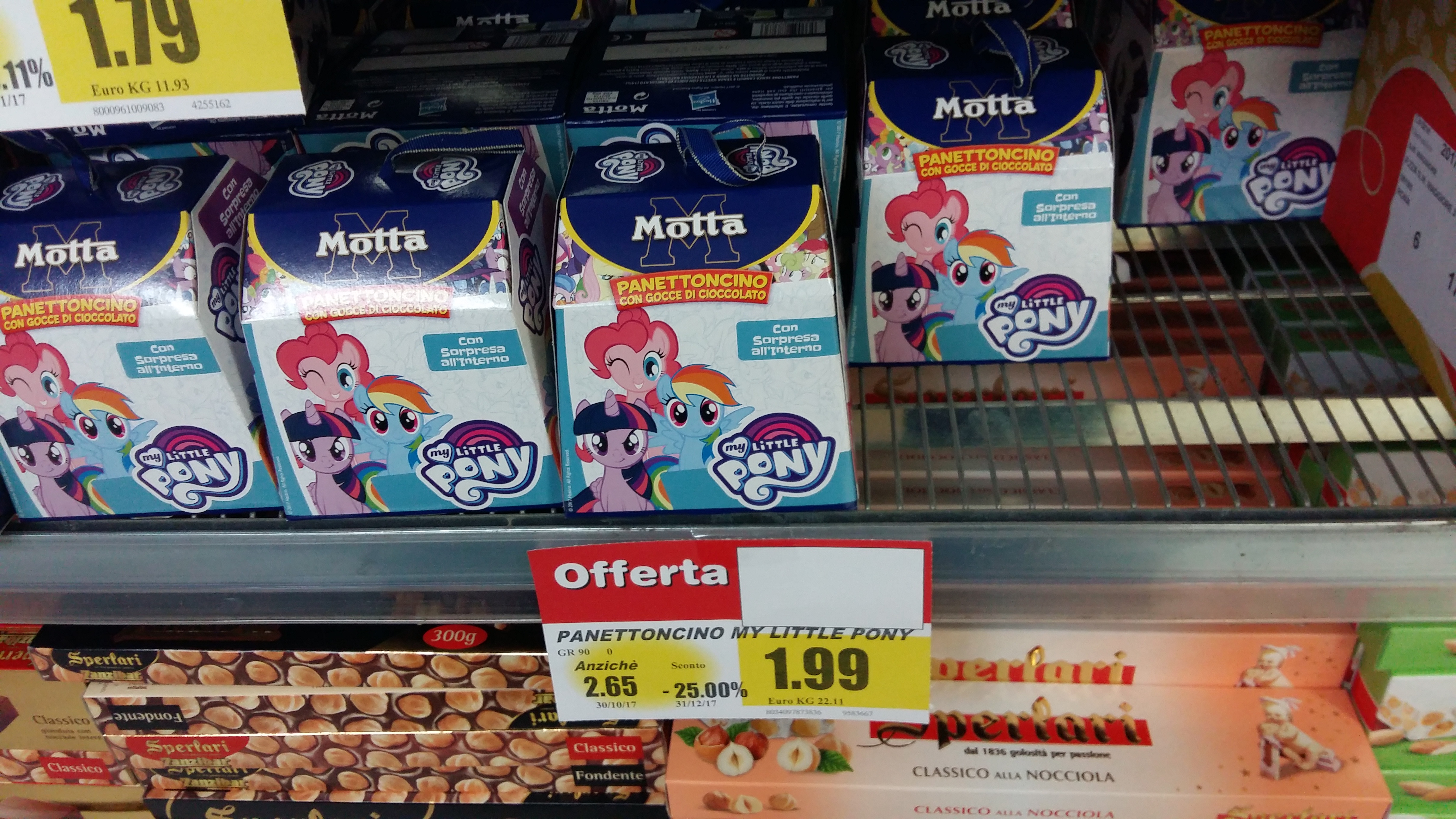 I was against buying it. They argued the following.

Let’s take a closer look. The front and back have the same picture, but the two sides are different. 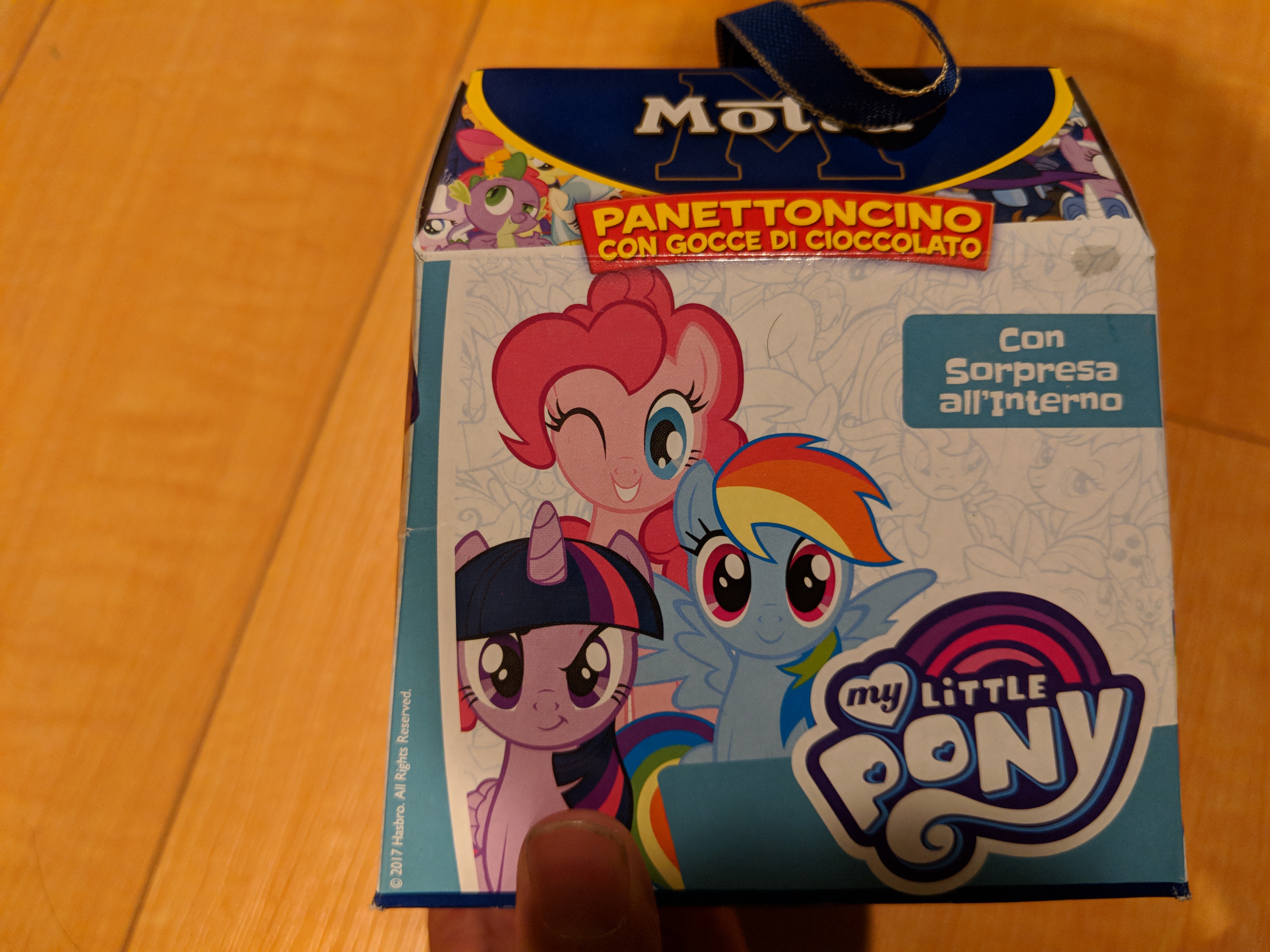 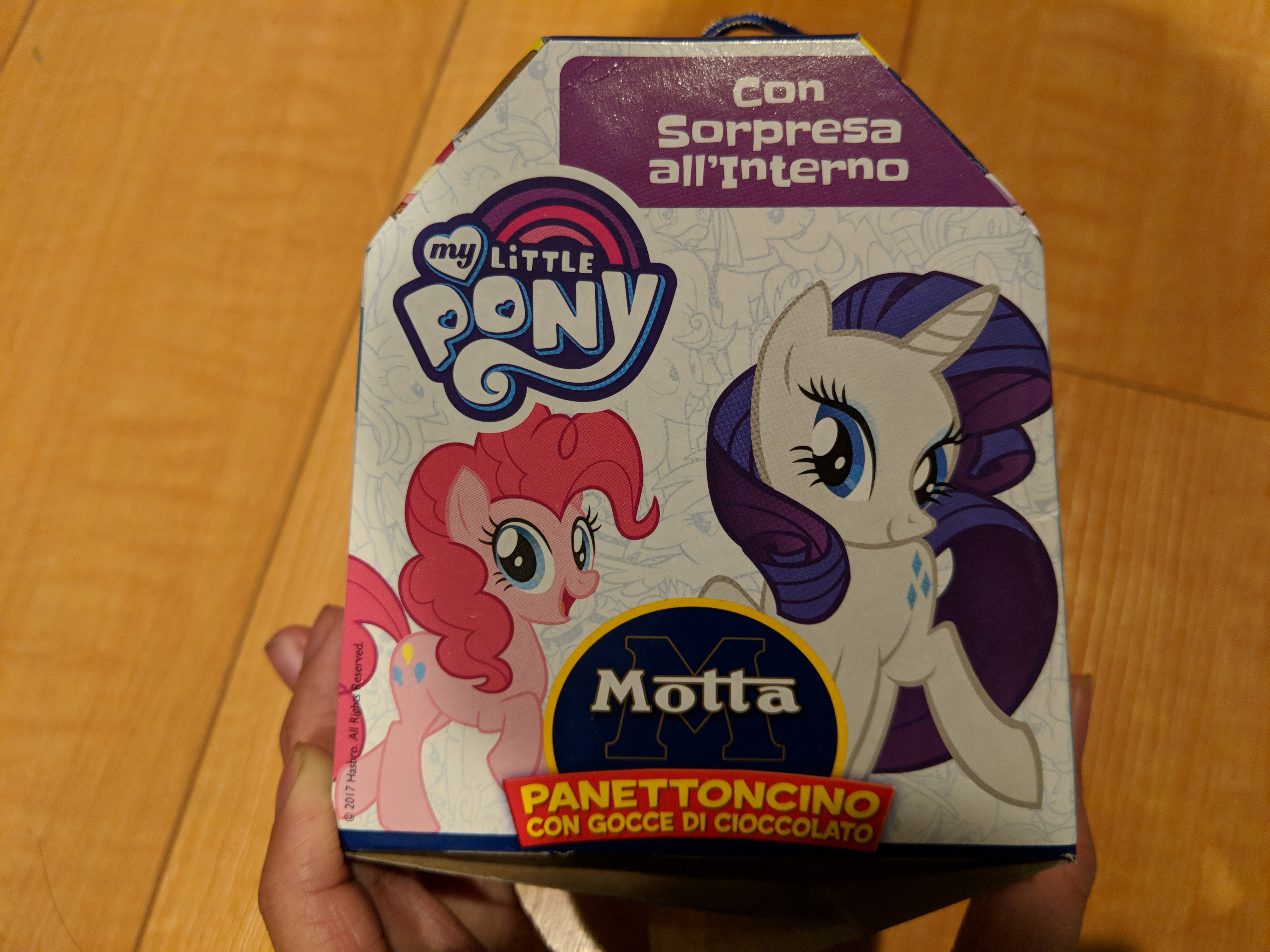 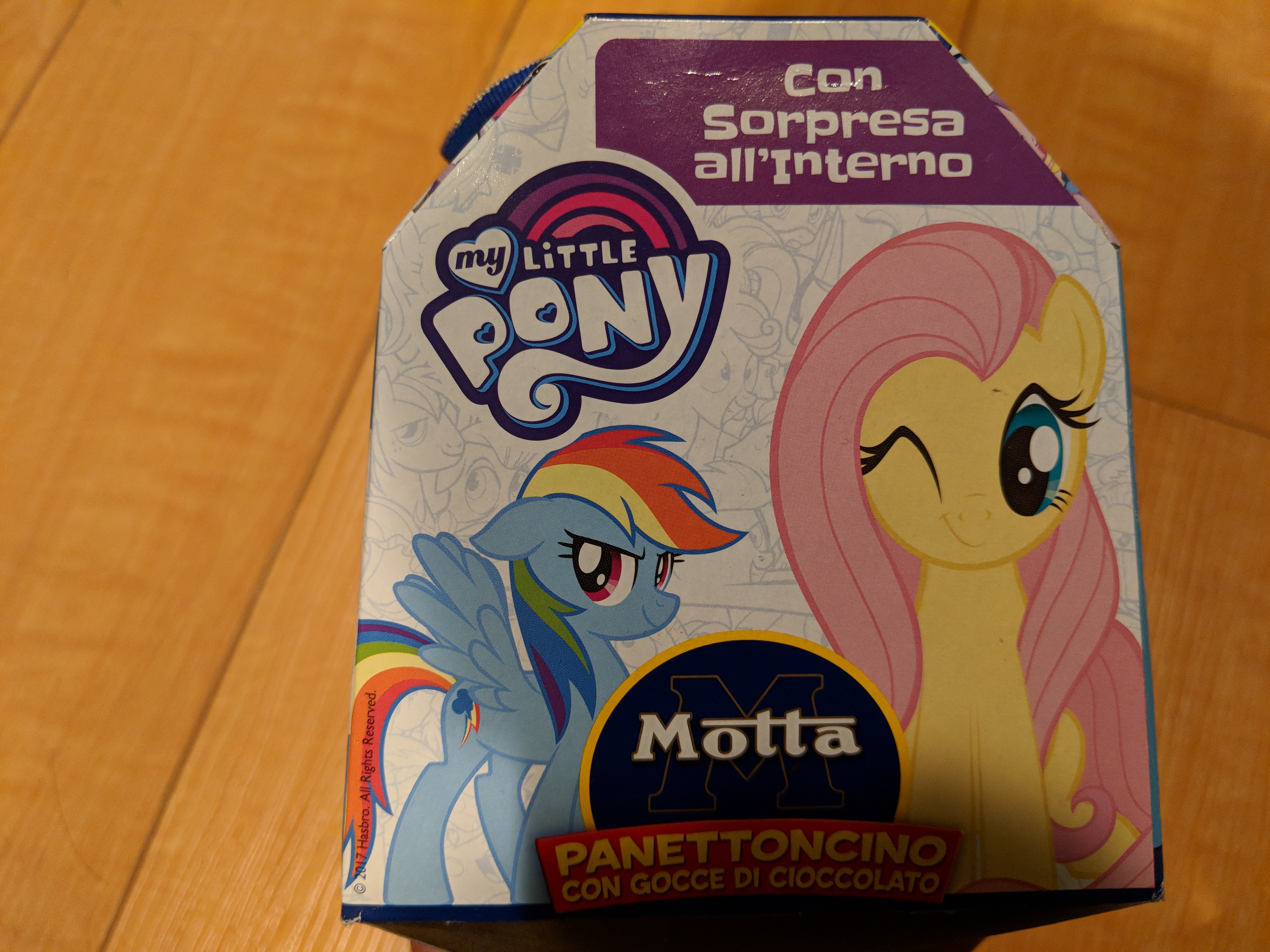 The first thing I noticed was that the character art looked…off, somehow. In what world does Fluttershy wink like that? In what world does Twilight smirk like that. Expression-wise I’m pretty sure neither has made that face in the show, and it feels out-of-character for both of them. Fluttershy seems too reserved for a playful wink. Twilight seems too nice for a knowing smirk.

Rainbow also looked off, and after staring at it a while, I figured out why. Normally her mane hangs over her left eye, but here it hangs over her right. 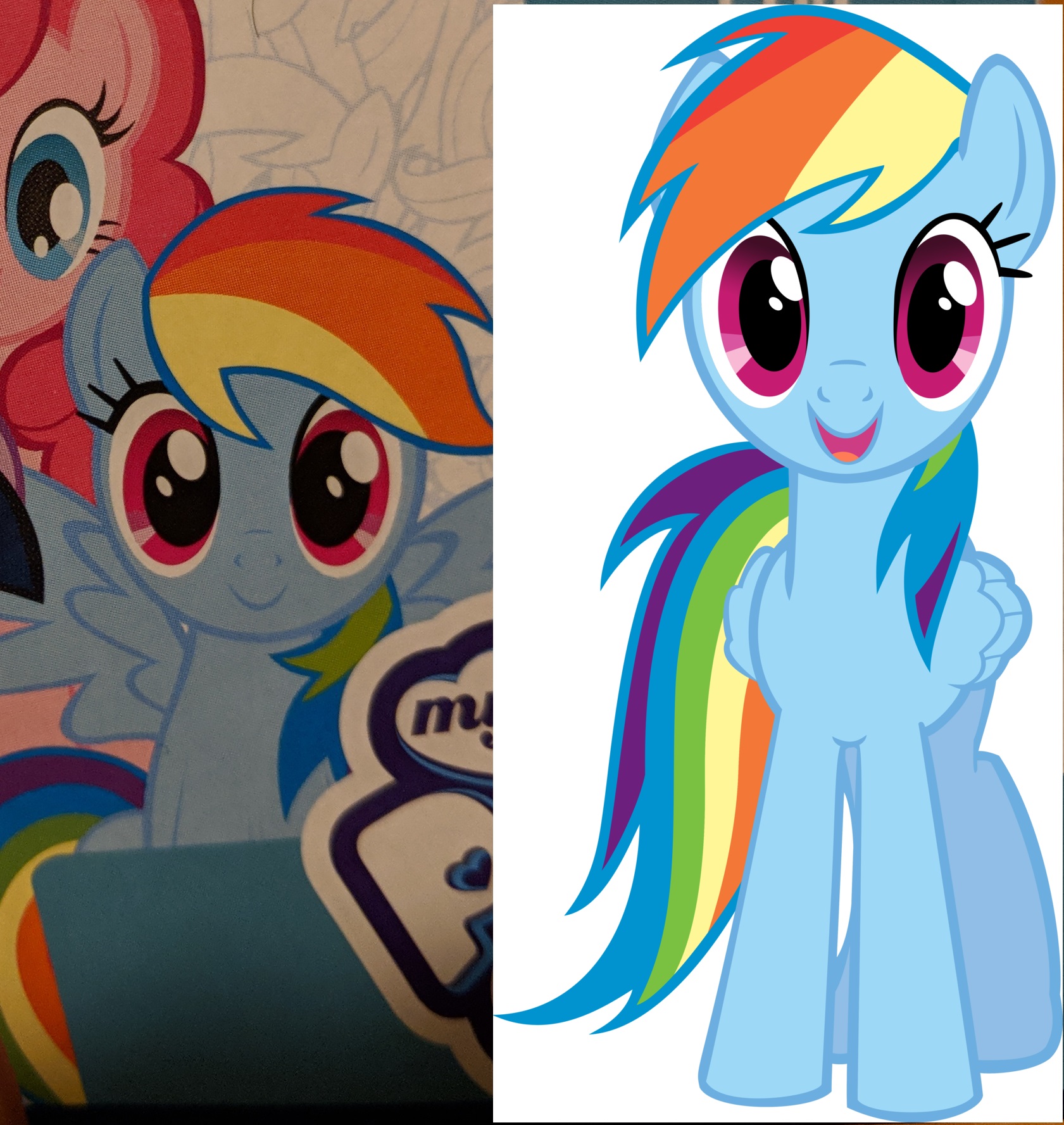 Literally unbuyable. I’m only kind-of joking, actually. Look, here’s my view: fans have the right to call out shitty merchandise. Like, if you’re going to monetize your show, you should at least have your merchandise reflect what your show looks like! Don’t even tell me that the target audience of young girls won’t care. I suspect the target audience does care. One, I believe children are more perceptive than people think. Two, when you’re a kid, you don’t have as much going on in your life, which makes it easy to obsess over the details of your Saturday morning cartoons. The moment they changed Ash Ketchum’s voice actor in Pokemon, I was done with that show.

Take Brave as a case study. The goal of Brave was to create a Disney princess that avoided the gender stereotypes of the old Disney princesses. The movie succeeded. The marketing didn’t. 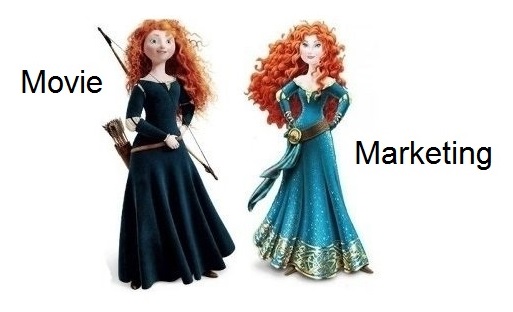 The marketing made Merida slimmer, made her a bit older, removed her bow, and made her hair less curly. Anecdotally, my Facebook feed had a few comments from parents, saying their daughter didn’t like it because “her hair wasn’t as curly”, and “it’s not the same Merida as the movie.” (You can read comments from Brave’s director here, if you’re interested in further ranting.)

The details matter. Don’t mess them up.

Opening the box produces this. 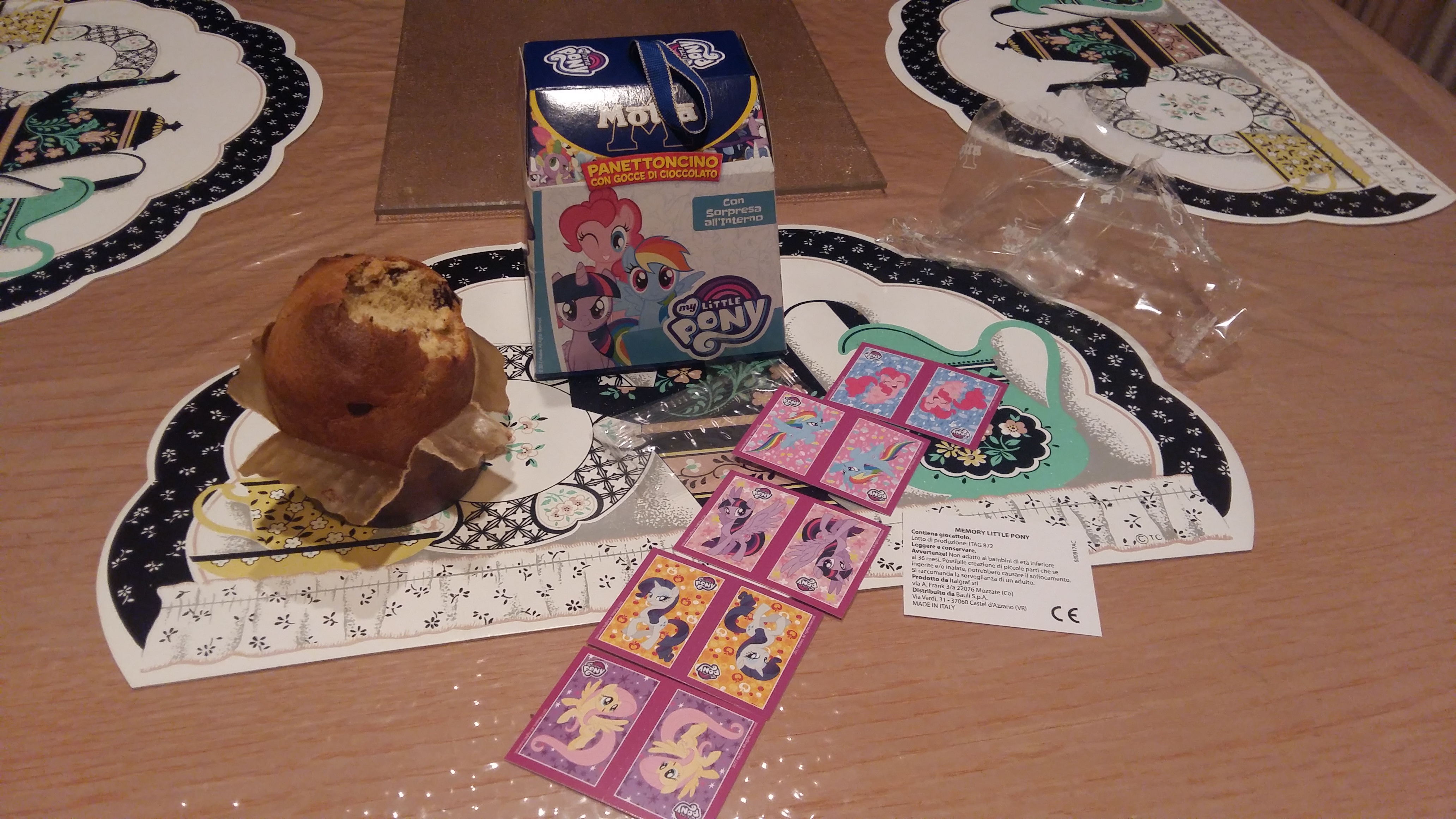 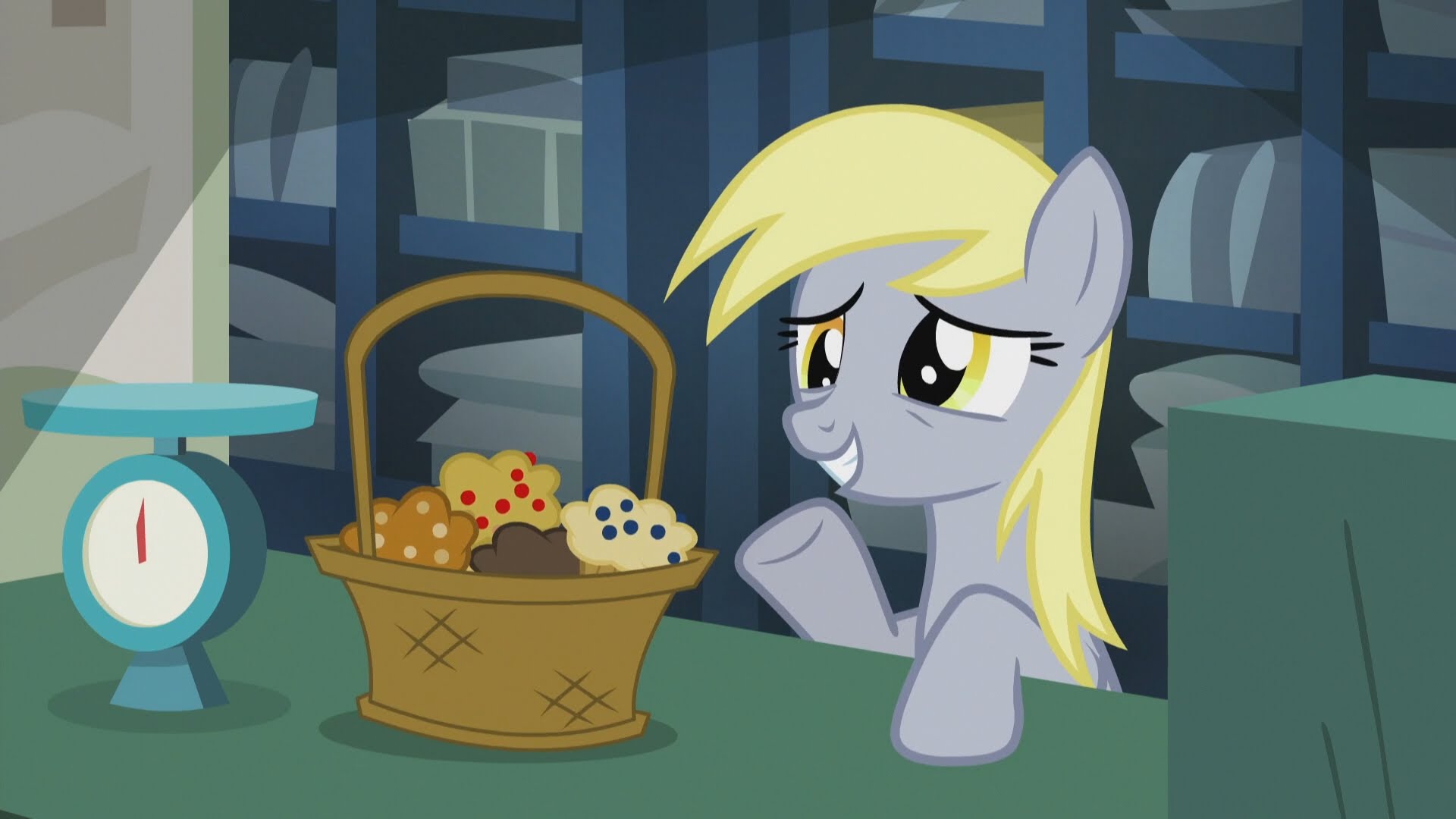 Let’s take a closer look at these cards. 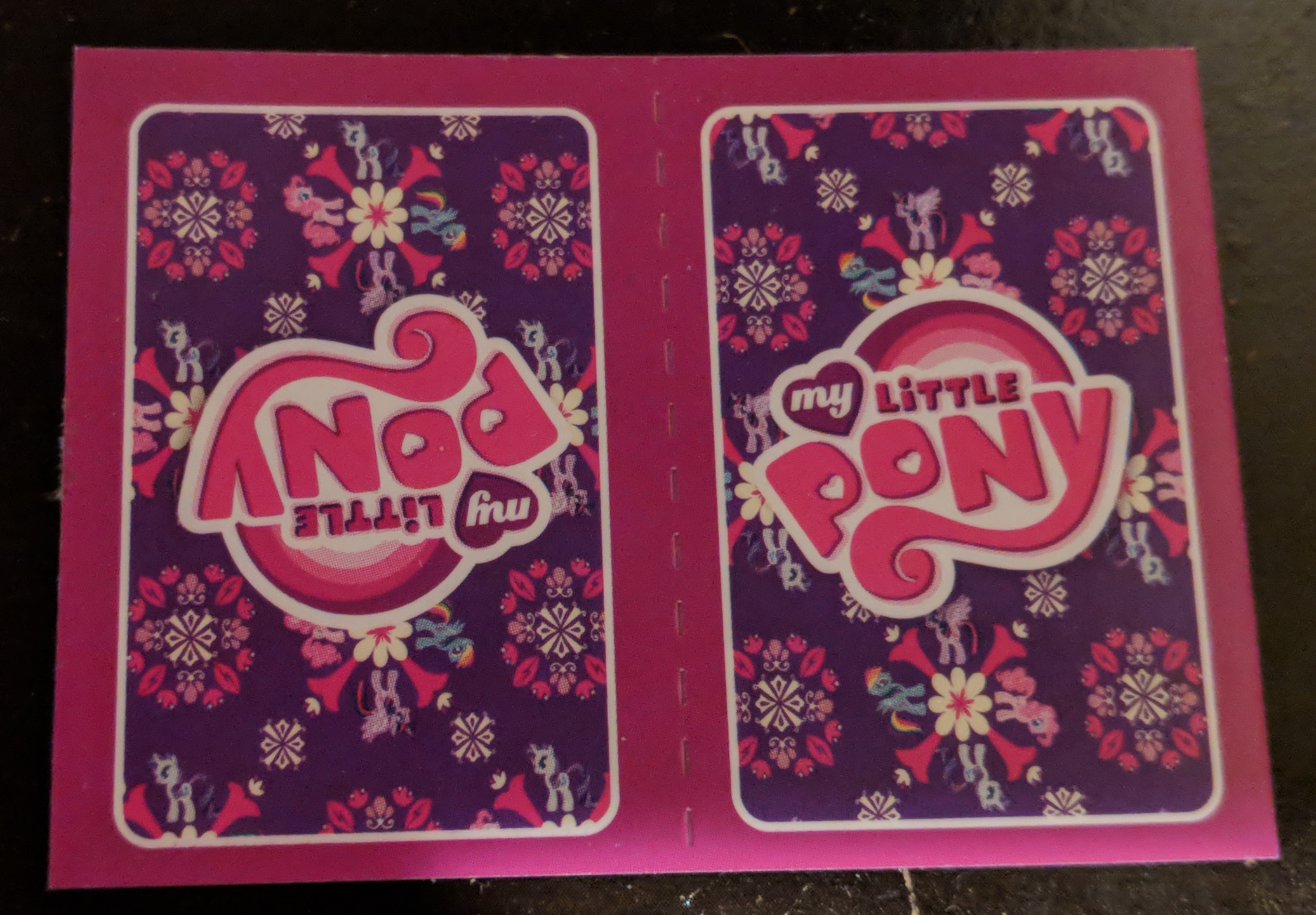 (Card backs. It’s identical for all of them.)

Awwwwww, they’re so cute! I have no issues with the art here. But wait a second, there’s only 5 cards. Isn’t it supposed to be the Mane 6? Where’s Applejack? She’s not on the front. She’s not on the back.

Speaking of which, is Applejack even on the box?

Scroll up if you want. She isn’t. Applejack doesn’t appear anywhere on or in this box. Every other pony in the Mane 6 is there. The top bar has plenty of side characters. 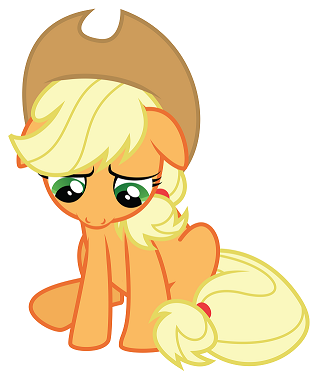 Strike the “Chinese food in Rome” thing. This right here is a What the hell were you thinking? moment. Applejack certainly isn’t that popular, but come on, she’s part of the main ensemble! There are plenty of Applejack fans!

This is funny at a meta-level, because people like to joke Applejack is “the best background pony”, but it’s sad for fans that have to see her getting treated as a second-level citizen. Either this is a mistake of colossal proportions, or Applejack is just that unappealing of a character. I’ll be generous and go with the former.

I’ve bought other MLP merchandise, but it’s primarily been fan-created merchandise. Fan merchandise tends to match the quality I expect, because it’s made by people who actually care about getting the details right.

Look, Hasbro, just do it better next time, alright?