Say you go on a group trip. People foot the bill for different expenses, and need to get paid back later. Splitwise is a webapp that does all the bookkeeping for you.

We can interpret these payments as a weighted directed graph, where people are vertices and edges are payments. 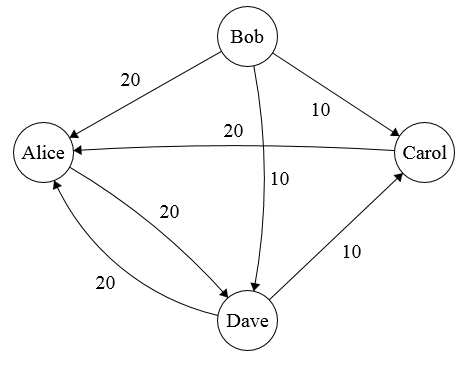 There are some redundancies in the graph. For example, Alice and Dave each need to pay each other $20. Since the net money between them is $0, we should just remove those edges to avoid doing extra transactions. 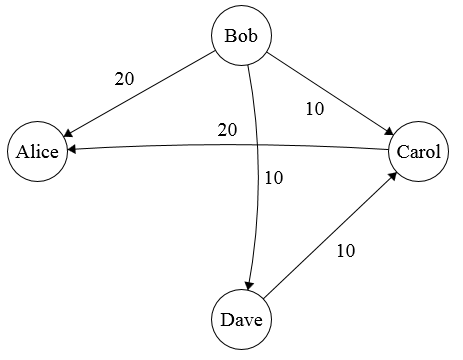 Splitwise does this for you. In fact, it goes one step further. Splitwise tries to minimize the total number of transactions in the graph.

Let’s go back to the example above. Carol receives $20 in total from Bob and Dave, then pays $20 to Alice. Instead of routing their money through Carol to Alice, Bob and Dave could pay Alice directly. Carol is still net +$0 and Alice is still net +$20, but now Carol doesn’t have to pay anyone. That reduces the graph to this one. 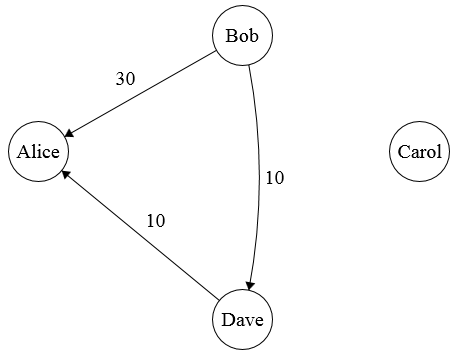 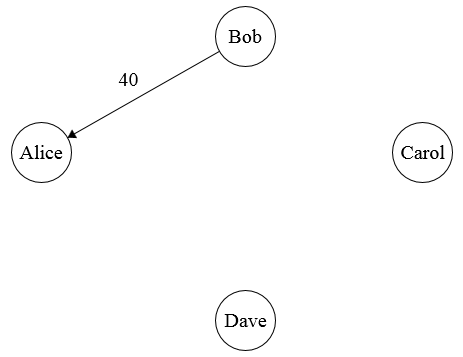 We’ve simplified the graph down to a single payment. Pretty neat, right? You can see how a tool that does this automatically could be useful.

This raises an interesting question. How would you solve the Splitwise problem in general? We formalize the problem below.

My first intuition was that the Splitwise problem was very similar to a network flow problem. You want to shuffle money around a graph while minimizing costs.

Min-cost flow is solvable through linear programming, but it’s not obvious that minimizing the flow in the graph is the same as minimizing the number of edges needed. So, I started looking elsewhere.

Note that in flow problems, we assume only edges \((u,v)\) in the graph can send things to each other. In the Splitwise problem, anyone can send money to anybody else.

Instead of trying to reduce existing edges, let’s figure out how much everybody should pay, then add edges by ourselves. To minimize the number of edges, one natural idea is to send as much money as possible in every edge. This motivates the following algorithm.

He then proved Splitwise is NP-Complete, by showing Partition reduces to Splitwise.

Next, construct a reduction from Partition to Splitwise. Given a list \(S\) of positive integers, we want to know if there is a partition \(S_1,S_2\) such that both sets have the same total sum.

It turns out the greedy algorithm gets pretty close to the optimal value in most cases. Based on a Quora post by a Splitwise founder, the site uses something similar.

So, Splitwise isn’t finding optimal solutions on a regular basis. Oh well. I still think it’s neat that an NP-Complete problem fell out at all.