(Very minor spoilers for Friendship Games. Read at your own risk.)

(Click on any image to see the full size photo.)

It’s not well known outside the fandom, but My Little Pony: Friendship is Magic has a high school spinoff called Equestria Girls. It’s a movie series that exists only because of the merchandise potential. Reception to the films is mixed, but it’s widely agreed they’re nowhere near as good as the show.

The most recent entry, Friendship Games, came out September of this year. It’s…well, it’s definitely a movie. The pacing is off, the plot is silly, and the world stretches suspension of disbelief way too much. (Magic is real, humans are growing wings, there’s a portal to an alternate universe, and no one outside the school knows about it despite almost no attempts to hide it. Really?)

That being said, I still enjoyed it. The animation is excellent, and the songs are catchy. Here’s one of those songs.

This segment is a ton of fun. It gets so much mileage out of facial expressions and body language, the way good animation should. I’d also like to point out all the badass science and carpentry these girls are doing. Hooray for casually breaking gender stereotypes!

But, that’s not what this blog post is about. It’s about this frame. 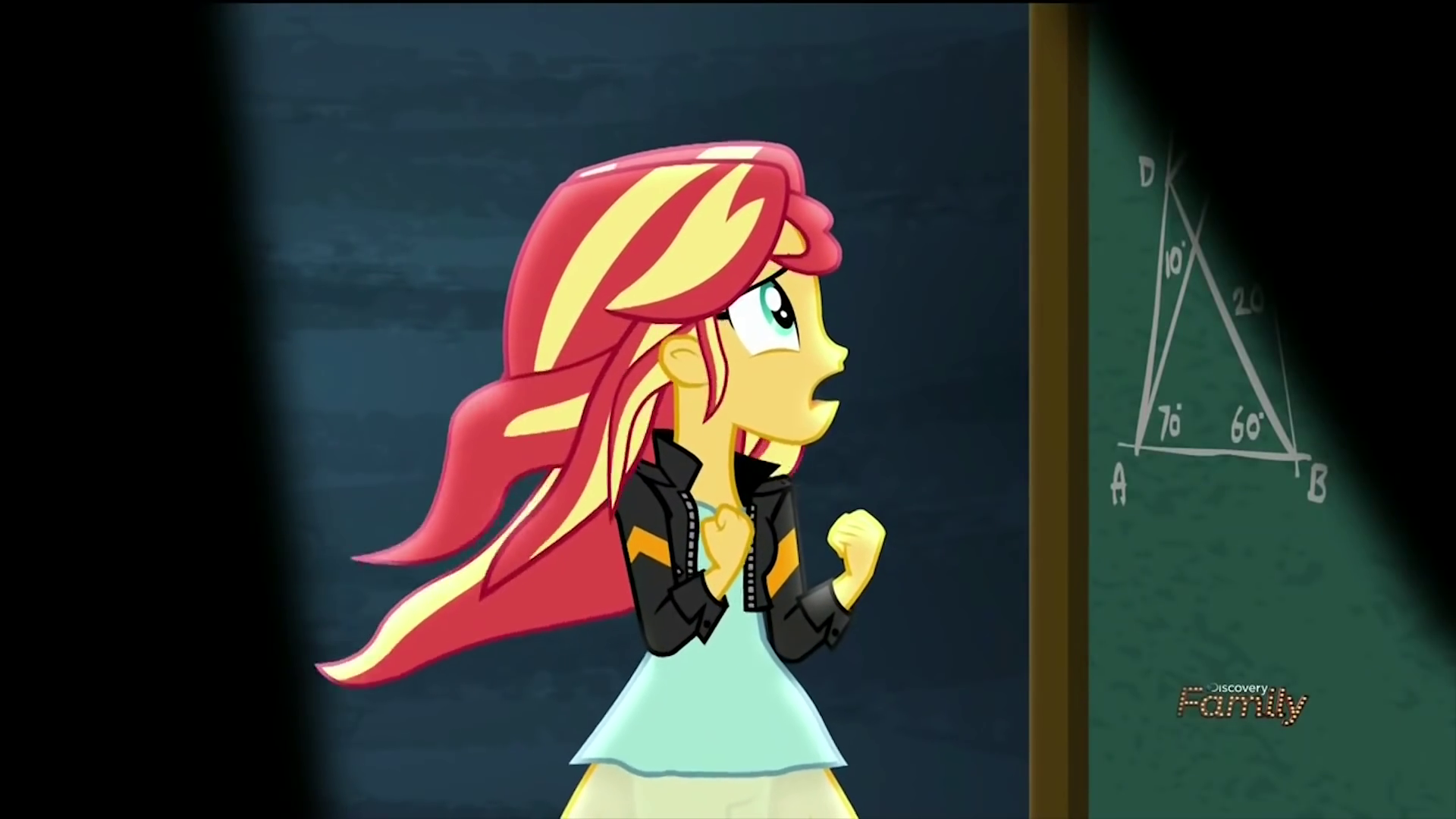 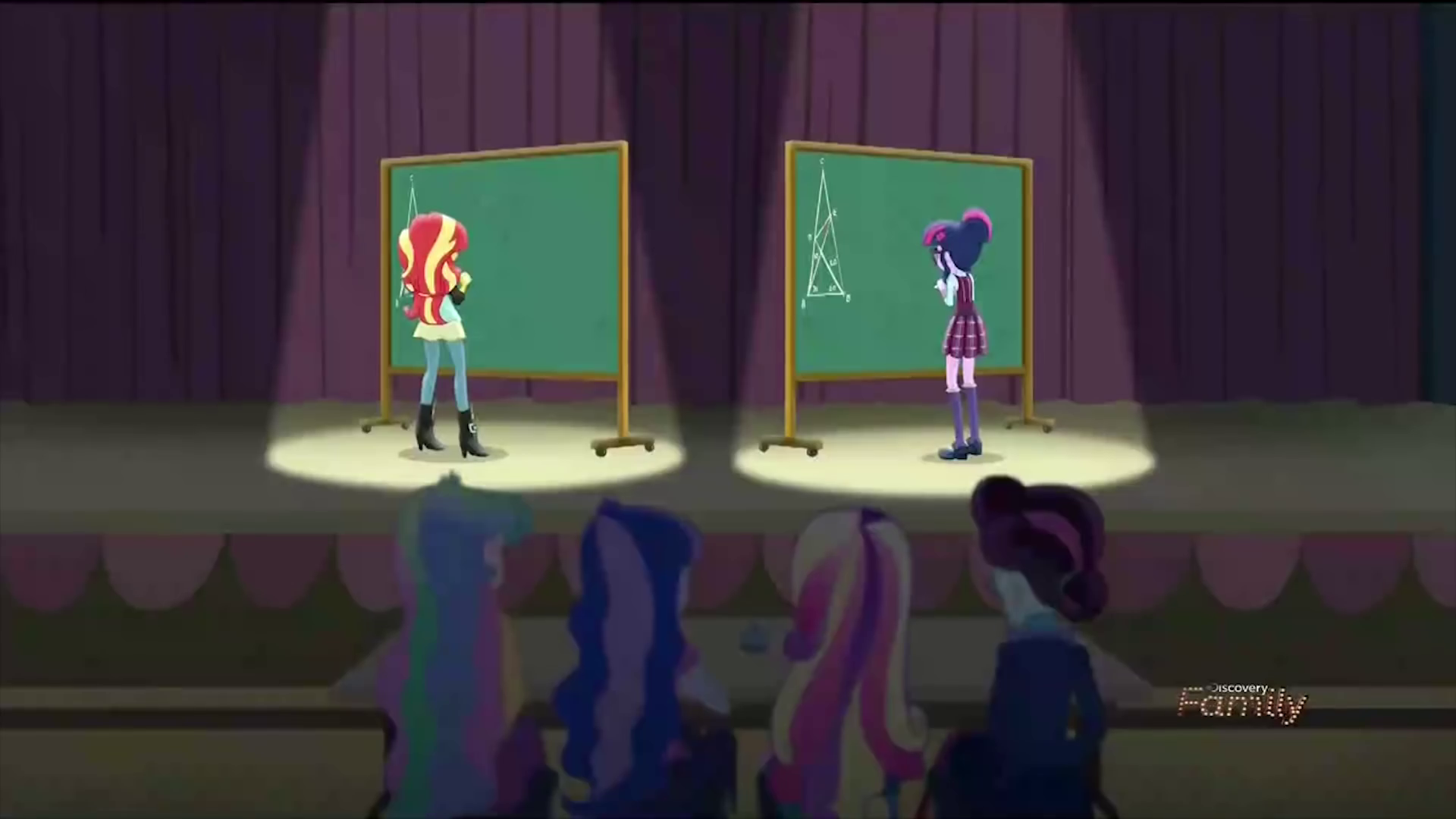 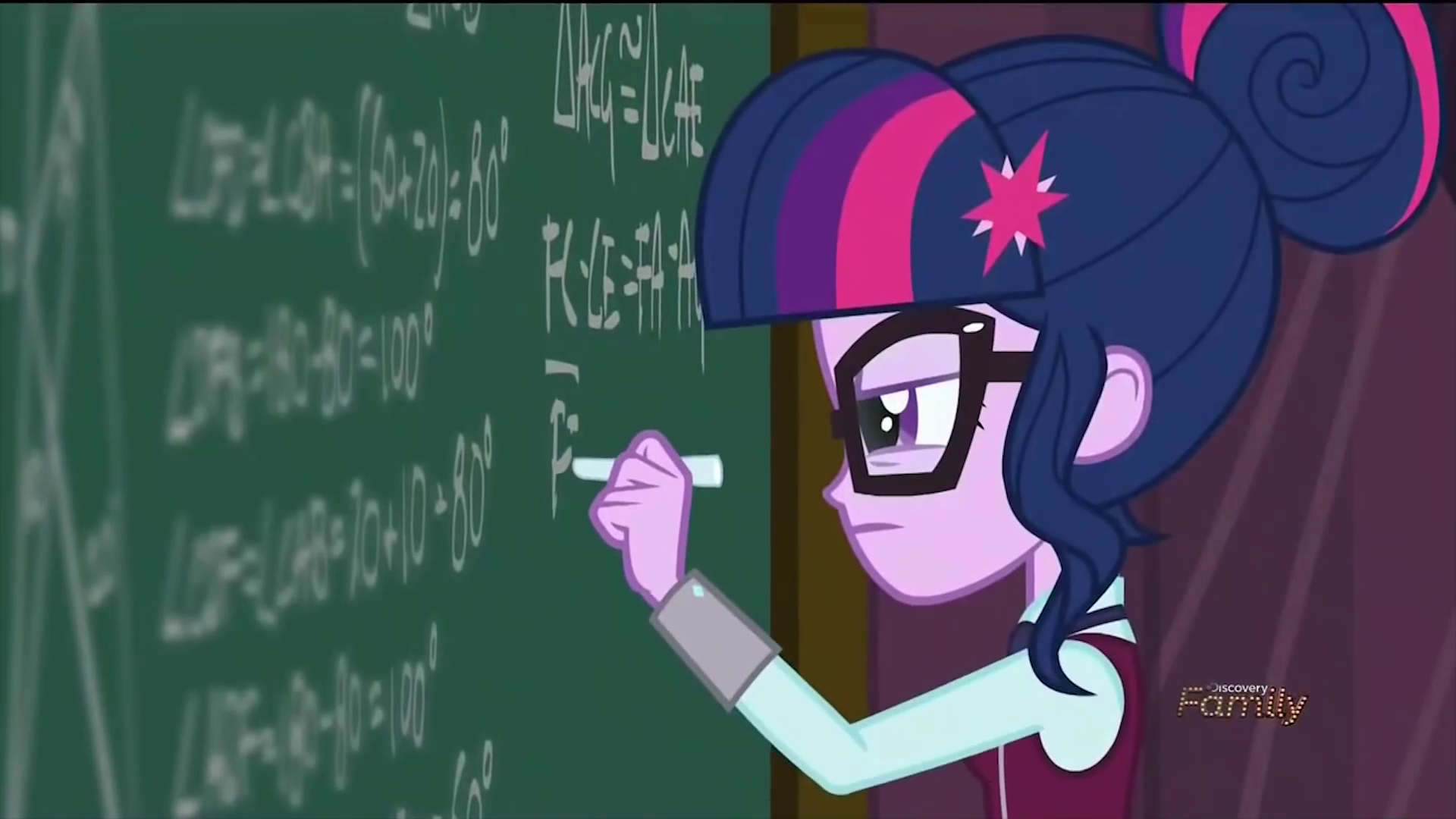 Let me explain why this is the best thing ever.

I did math contests in high school. My favorite subject was Euclidean geometry. I took a course on Euclidean geometry for math contests. I made honorable mention in Bay Area Math Olympiad because I knew about radical axes. This is an animation of two high school students competing on a geometry problem. THIS WAS ACTUALLY MY LIFE. One huge part of my identity got animated into another huge part of my identity. It’s so wonderful.

And the animators didn’t half-ass it either. These chalkboards look like valid geometry proofs. There’s no immediate reason to believe they aren’t. I wonder if the proof’s correct…

To investigate this, I first gave the animators the benefit of the doubt and assumed it was real. There’s a good reason to assign a high prior on this. The time travel episode from season 2 of Friendship is Magic included equations from special relativity describing time dilation. The 100th episode had a free body diagram and several equations from Newtonian physics. I give the team a lot of respect on attention to detail. At this point, they could add Fermat’s Last Theorem as an Easter egg and I wouldn’t bat an eye.

Let’s chase that assumption for a bit. It’s easiest to see the diagram at the start and end of the contest. 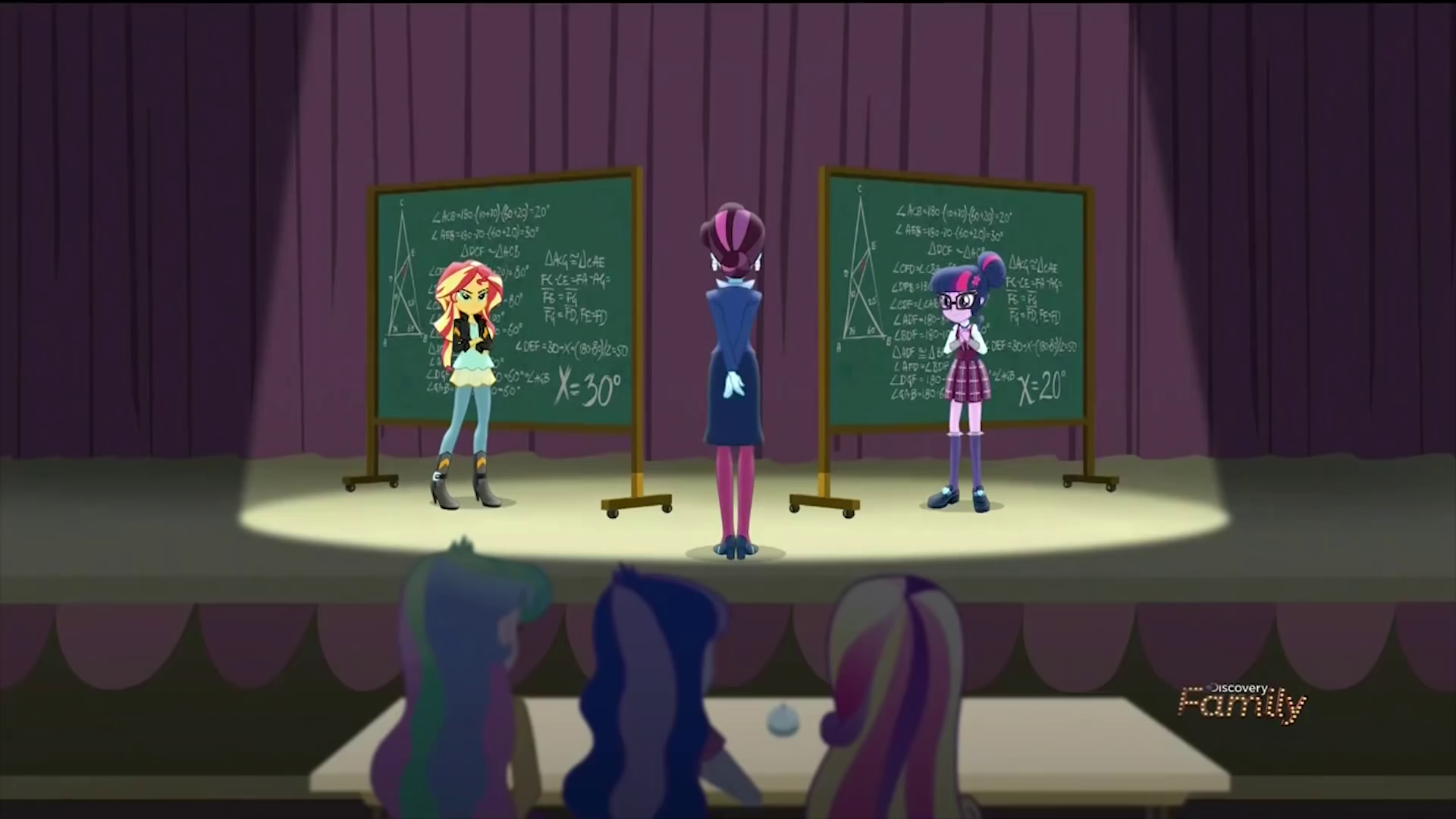 On a closer look, the diagram looked vaguely familiar. Let’s set that aside for now and ask what else we can figure out.

At the beginning, there’s no text accompanying the diagram, so the problem must require no additional detail. At the end, the writing on the chalkboard only involves lines, triangles, and angles. Notably, no trigonometry and no side lengths. If it is a real problem, then it’s an angle chasing problem. Yet for an angle chasing problem, this is a surprisingly long proof. In my experience, angle chasing is pretty short, but Sunset and Twilight have filled an entire chalkboard with derivations.

(Again, at this point it’s only likely this is a real proof. What I’m doing here is finding out what a real proof would imply to help narrow down what the problem is. Based on how easy/hard it is to find a problem matching those deductions, I can adjust how likely I believe the proof is real. It’s possible the animators made a new geometry problem just for this movie, but I don’t think they’re crazy enough to do that for 25 seconds of animation.)

After some searching, I found the World’s Hardest Easy Geometry Problem. It hits all the key details: it uses only angles, requires only basic geometry, and has a difficult solution. I had actually seen this problem several years ago, which explains why the problem looked so familiar. The solution is \(x = 20^\circ\), which matches the answer from the movie.

and the given angles match up 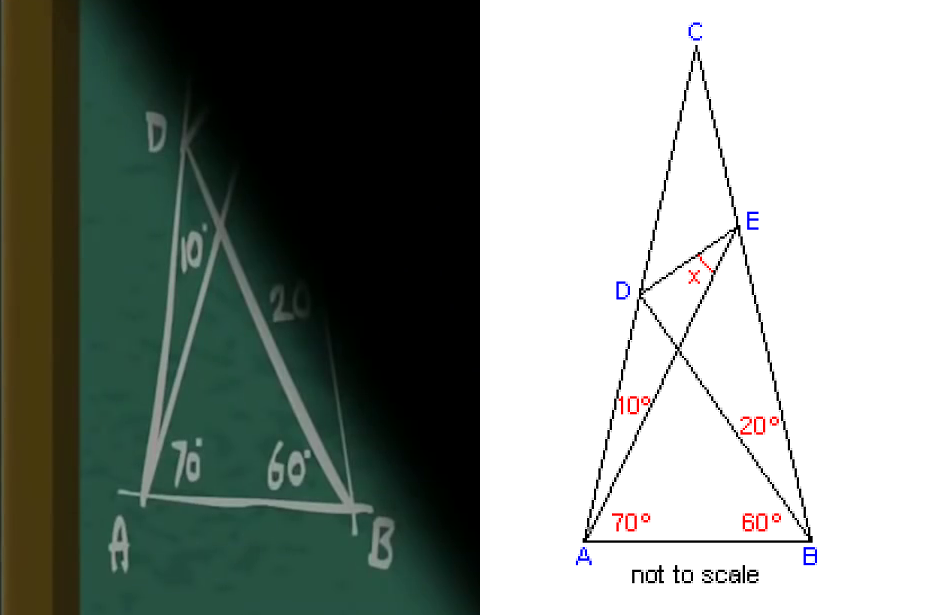 It’s certain this is a real geometry problem and proof. The only question left is to see how accurate the animators were.

Unfortunately for geometry enthusiasts, the movie spends very little time on the proof. Most of the proof is in this montage.

Stepping through this frame by frame gives the money shot. 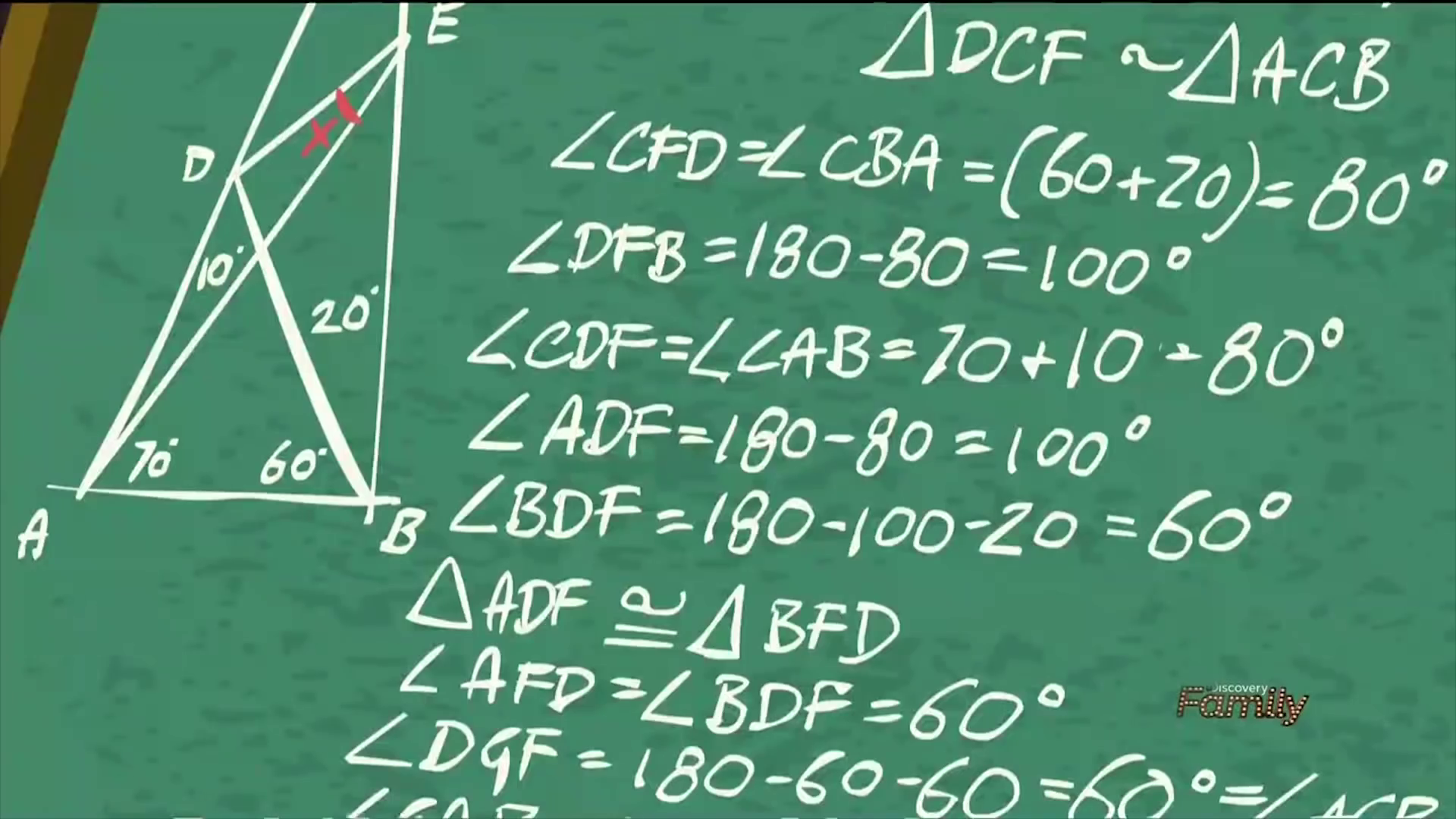 This is the clearest shot of the chalkboard in the entire sequence. It’s also only shown for 0.2 seconds. A lot of work, for something that people will barely notice. The text lines up exactly with the second section of the proof.

The rest of the montage has nothing new. There’s this shot 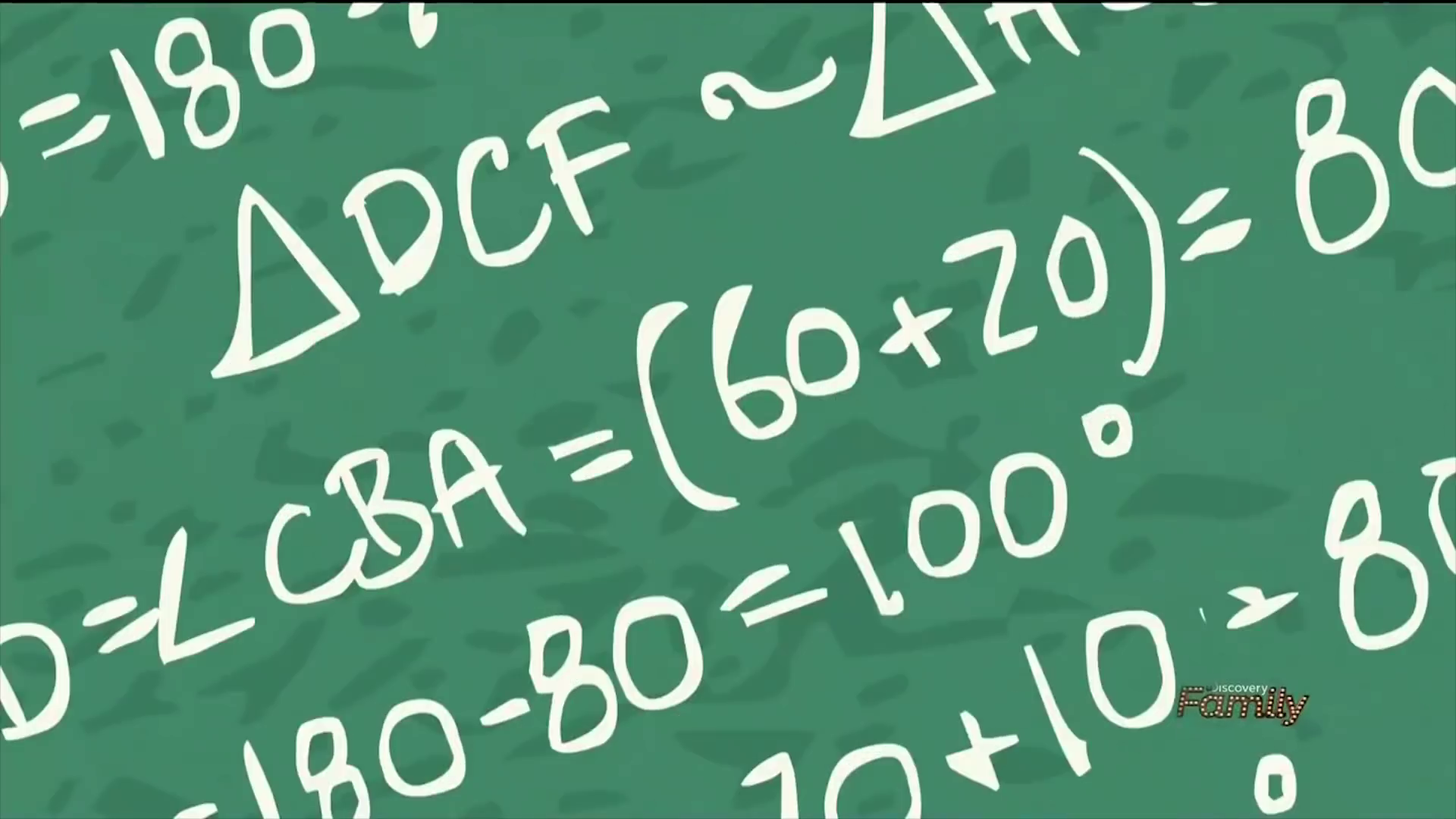 which is a closeup of the top line of the second section, and this shot 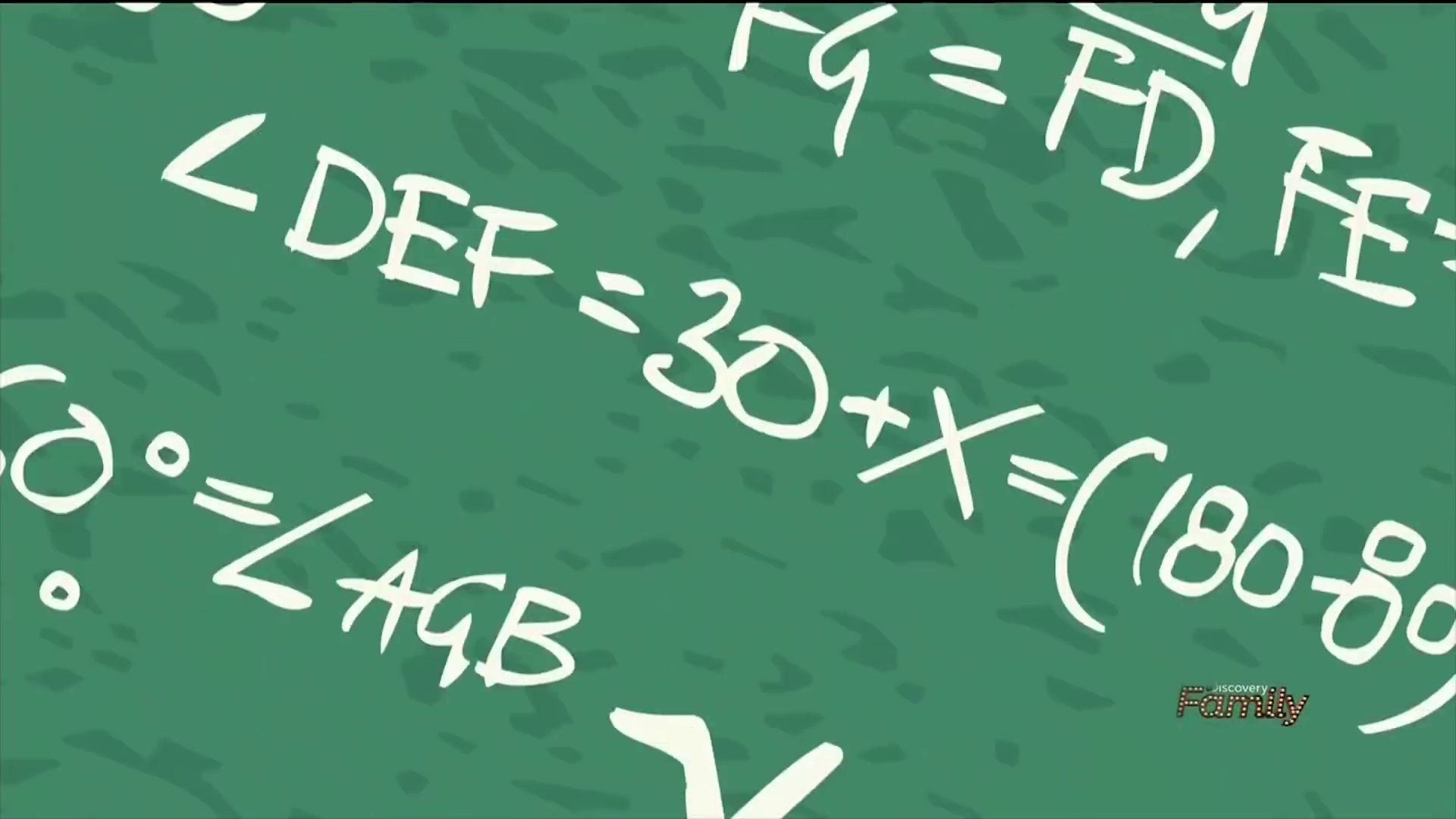 The first section of the proof only appears in the final shot. I had to zoom to see it, so it’s a bit blurry.

which again lines up with 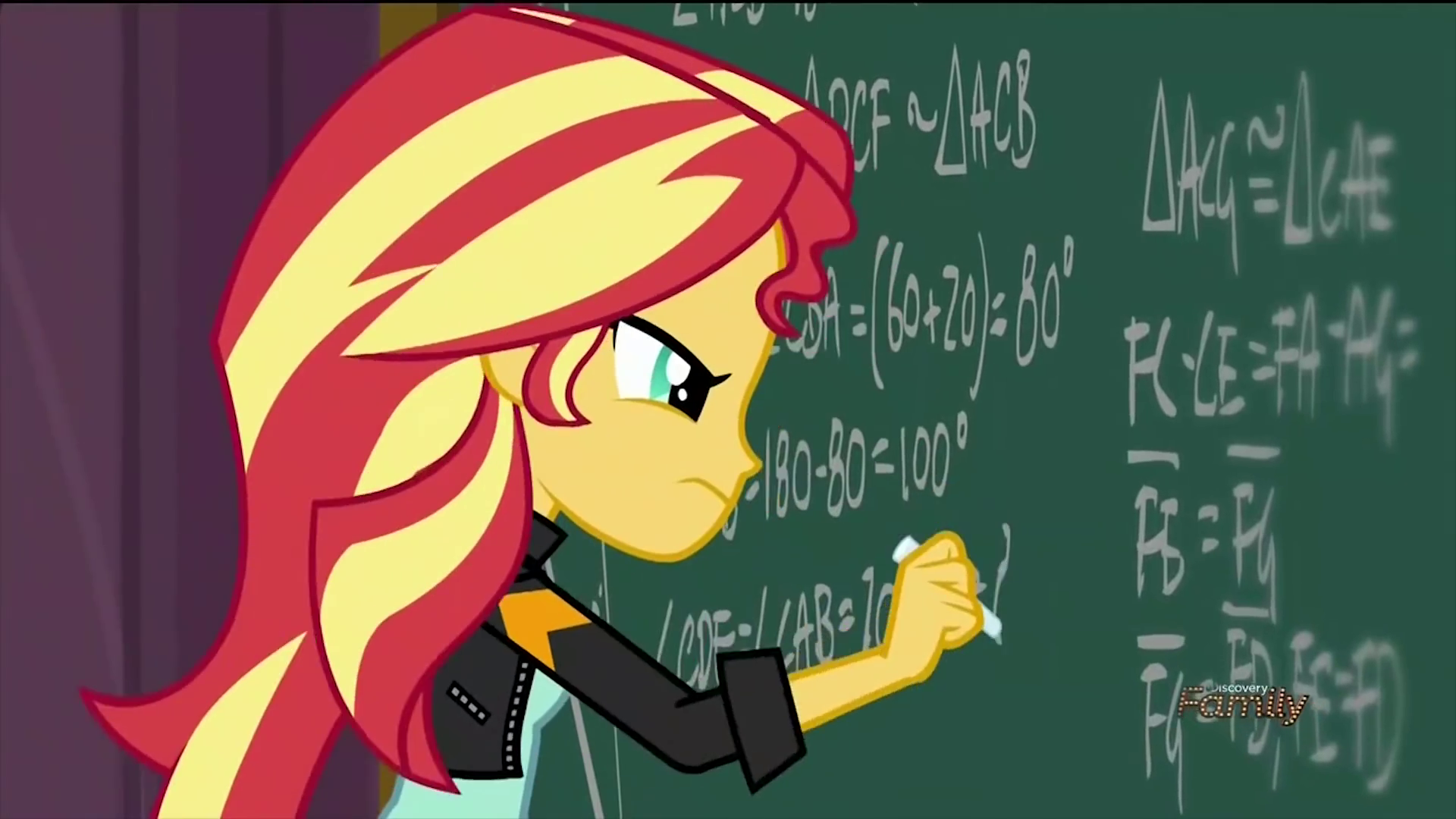 which gives the final lines

Overall, I’m impressed the animators got as much right as they did. It also shows that Sunset almost, almost solved the problem, since her only error is an arithmetic mistake at the end. Sometimes that’s how these things go. Now that I’ve done all of this, I actually like this scene more. Sunset Shimmer’s fall to villainy was based around a desire to be the best at all costs, and her redemption is about her anxiety at failing to make up for all the damage she caused. With all the self-loathing and setbacks she goes through, it’s easy to forget she’s almost as good as Twilight.

Nice job team! Now, if only you remembered how to spell…