You know the cliche interview question,

“Where do you see yourself in five years?”

There’s the answer you’re supposed to give: “At the same company, but higher up the ladder.” I’ve always wondered about the people who actually answer that both honestly and confidently. How can they be so sure of where their life will lead? People like that actually exist?

If you has asked me that five years ago, I’d have no idea what to say, but I certainly wouldn’t have told you I’d be writing a post about a MLP x Doctor Who fan series.

The main horse (okay, pony) is Twilight Sparkle, a unicorn prodigy. She’s incredibly smart and hard working, but she’s also a bit socially inept, and is prone to freaking out over small details.

It’s surprisingly good. Although it takes a while to warm up to it, once you like the characters the show just clicks and becomes a joy to watch. Friendship is Magic starts with Twilight saving the world from eternal darkness, then shifts to slice of life. On rare occasions, it shifts back to adventure, where the main cast have to fight monsters that escaped Tartarus, break up communistic cults, and save kingdoms from totalitarian dictators.

Yes, really. All of that is canon.

As for the fandom, the MLP fandom is one of the craziest and most prolific fandoms in the world, and I proudly count myself as a member.

The Short Doctor Who Primer

So. I actually haven’t watched any Doctor Who. Everything I know about the show is from Internet osmosis. I’ll say what I know, and apologize in advance for any Doctor Who misrepresentation. (So to any Whovians reading this: please don’t kill me.)

Doctor Who is a long running show by the BBC. I do mean long. The first episode aired over 50 years ago.

The eponymous Doctor is a Time Lord who time travels in the TARDIS, which takes the appearance of a London police box. Although he looks human, he’s somewhere around 1000 years old. Whenever he dies, he regenerates into a new form and personality, which keeps the show fresh. (That’s the in-universe explanation. In reality, it’s a way to change the actor.) Together with a companion (a human who’s in on the Doctor’s secret), he travels through time and space, fighting monsters like the Daleks or the Weeping Angels. Or, he resolves the local trouble he sees in this part of the multiverse. Most likely, he’s doing both at the same time, all while being either a little too insane or not insane enough.

So….Why Are There MLP x Doctor Who Crossovers?

Some people noticed there was a recurring background pony with hair very similar to David Tennant’s, one of the Doctor’s actors. He also had a cutie mark of an hourglass, meaning his special talent was related to time.

Left: the pony. Right: the human. Honestly, not a slam dunk case.

When you combine those two details with the craziness of the MLP fandom, there’s only one reasonable outcome. Fans quickly christened him “Doctor Whooves” and to this day he’s one of the most popular fan characters. 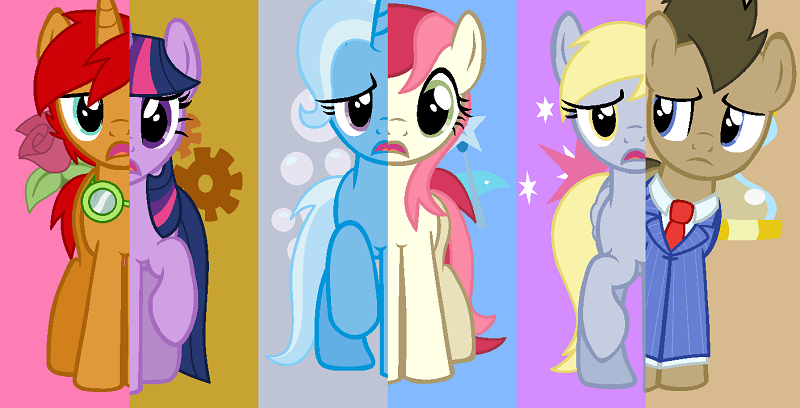 The companions from just the audio plays. Left to right: Tick Tock, Twilight, Trixie, Roseluck, Derpy, Doctor Whooves. Include fanfic and you might as well add the whole cast. (By Lilla Dessert.)

Among the sea of fan content was the fanfic “Number 12”, by SqueakAnon. (The name is accurate. Squeak’s gender and real name are both unknown.)

Squeak’s take was that Doctor Whooves was the 12th Doctor (the show was on the 11th at the moment.) The story starts with the TARDIS crashing into Twilight’s home, and ends with Twilight becoming the Doctor’s companion. It was well received, and that was that.

A while later, Squeak decided to take it one step further. He or she contacted other members of the fandom, and formed Pony In A Box Productions. Their mission: to create a full-fledged radio play. Their first episode was an adaptation of “Number 12”, and ever since they’ve been releasing new episodes under the banner Doctor Whooves Adventures.

And now we come to me. Around two years ago, I decided to listen to a few episodes. At first, it was just entertaining, but just like with MLP, at some point I realized Pony in a Box had stolen my heart, locked it away and threw away the key, and I didn’t even care. I love this series so, so much. I actually find it difficult to find things I don’t like about it. Doctor Whooves Adventures is in my favorite works of all time list, and it’s singlehandedly convinced me to watch Doctor Who, as soon as I find time for the inevitable binge.

Why Should You Watch This Show?

It’s funny when it wants to be, but isn’t afraid to be sad. The characters are not only well written but well acted. It mixes the two canons well: the overarching themes of death and loss from Doctor Who are tempered by themes of optimism and friendship from My Little Pony. Yet despite taking elements from both, you don’t need to know either My Little Pony or Doctor Who to enjoy this series. Everything is played straight and with few fandom in-jokes, and the cast carries the series on its own.

Below, I’m going to repeat the above, but in many, many more words. Let’s get to it!

Normally, you don’t expect fan creations to go through much production, which makes the effort put into Doctor Whooves Adventures all the more surprising. Pony In A Box holds themselves to high standards, and it shows. First, the writing staff (led by Squeak) prepares a script. Then, the voice actors record their lines. Once done, the sound team comes in, adding background music and sound effects. (As someone who has done very minor movie editing, this is both more important and more time consuming than it sounds.) At the same time, the art team creates promotional pictures. Finally, they publish to Youtube and iTunes. Every episode is a huge labor of love, and it shows in the end product. Here’s an excerpt showing this off. It’s from “Bells of Fate”, my favorite episode. In this part, a librarian is recounting the founding of the Green Isles.

Unfortunately, all that production means each episode takes a long time to finish. I’ve been waiting for the conclusion to “Bells of Fate” for over a year. Still, it’s coming out soon! Meaning, they targeted August of this year and it’s the end of September…but it is happening and I can’t begrudge the team too much. I know how long these things can take.

The writing and voice acting for this series is top notch. The strength of the vocal cast is a huge asset here, since the way they say the lines often conveys more than the words themselves. Because the writers can trust the voice actors, every line can focus on driving the plot forward without sacrificing characterization. Addtionally, since the characters are well defined, the plots can grow organically from the seeds the writers plant, letting them avoid the “hand of god” problem. (That’s my term for when writers need to add out-of-character moments to railroad the plot.)

The show also makes a point of having strong female characters and a gender balanced cast. (This is true of most MLP fanwork. When a fandom grows in open defiance of gender stereotypes, people pay a lot of attention to avoiding them. It’s a beautiful part of the community.) Twilight’s a fantastic companion; as one of the smartest ponies in MLP canon, she might be the only character that can keep up with the Doctor. She solves problems and gets herself out of trouble almost as often as the Doctor does, and although the Doctor knows more about the universe than she ever will, Twilight is the one who knows the most about the pony-filled world the Doctor landed in. They get a great teacher-student relationship going, and it’s just fun to see them play off each other.

There’s plenty of dry, deadpan situational humor as well. From the start of “Wrong Way Backwards”, where Twilight and the Doctor are shopping:

And although light humor is the standard tone of the show, one of the running themes is that people (or ponies, in this case) are haunted by tragedies from their past. From “Shadows of the Lunar Republic”, the account of a lunar pony:

However, after lots of struggle, everyone gets past their tragedy and self-loathing, moving on to better lives. That’s my favorite part of the writing. Everyone earns their happy ending, and it all ends well. Sure, maybe that isn’t realistic, but who says it has to be?

If you do decided to listen to the series, you can do so here. I recommend listening in episode order. Should you get bored, each story arc is only 2-3 episodes long, and there’s little continuity between them, so you’re free to jump to the better episodes. Here’s my short list, with the standard your mileage may vary caveat.

The remaining episodes (Shadows of the Lunar Republic, Chords of Chaos, Pony of the Opera) are ranked similarly. They’re fun, but not as strong as the rest.

It’s so strange to realize that five years ago, I was still in high school. So much has changed since then. I’d like to think I got a bit smarter, but odds are I’m still just as dumb and don’t know it yet. I’ll look forward to making another rant in a few years about why I was an idiot.

In five more years from now? Who knows? Maybe my love for this series will fade, but it’s hard to see that happening. Maybe Doctor Whooves Adventures will die a slow death, as the creators lose interest, but I hope that never comes to pass. The only thing I’m certain about is that I’ll never be certain about how my tastes will shift. The best I can do is to stay open to change, and to keep reaching.

Until next time. In the words of the good Doctor himself, 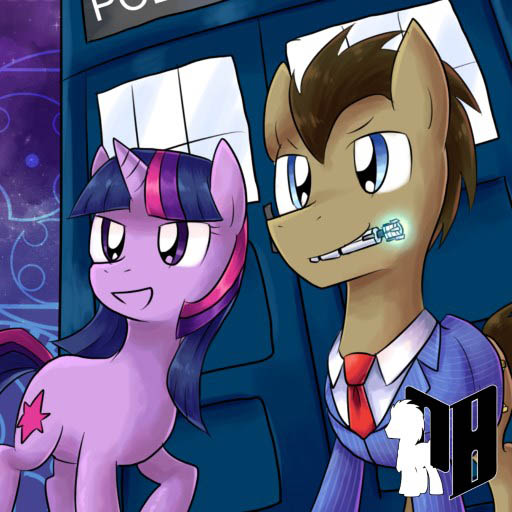