My car’s dead. It went through a long series of death throes, almost making it all the way through the pandemic, but now it’s dead, and the price of fixing it is too high.

I still need a car! You can get away without one in SF, but I live in South Bay, and South Bay is still a sprawling suburban hellscape if you don’t have a car.

I also want to consider the carbon footprint of my decision. What should I do?

First off - electric, hybrid, or gas? This is supposed to be obvious, but maybe it’s not. In high school, one of my teachers claimed that a new Toyota Prius was worse for the environment than a new Hummer over the course of its lifetime, because the CO2 emitted during production time was much higher and the gas savings didn’t make up the difference. I never checked this claim, and it was 10 years ago. Let’s see if it still holds up with the advances in battery production.

The European Parliament has an infographic for lifetime CO2 emissions from different kinds of cars, from 2014. 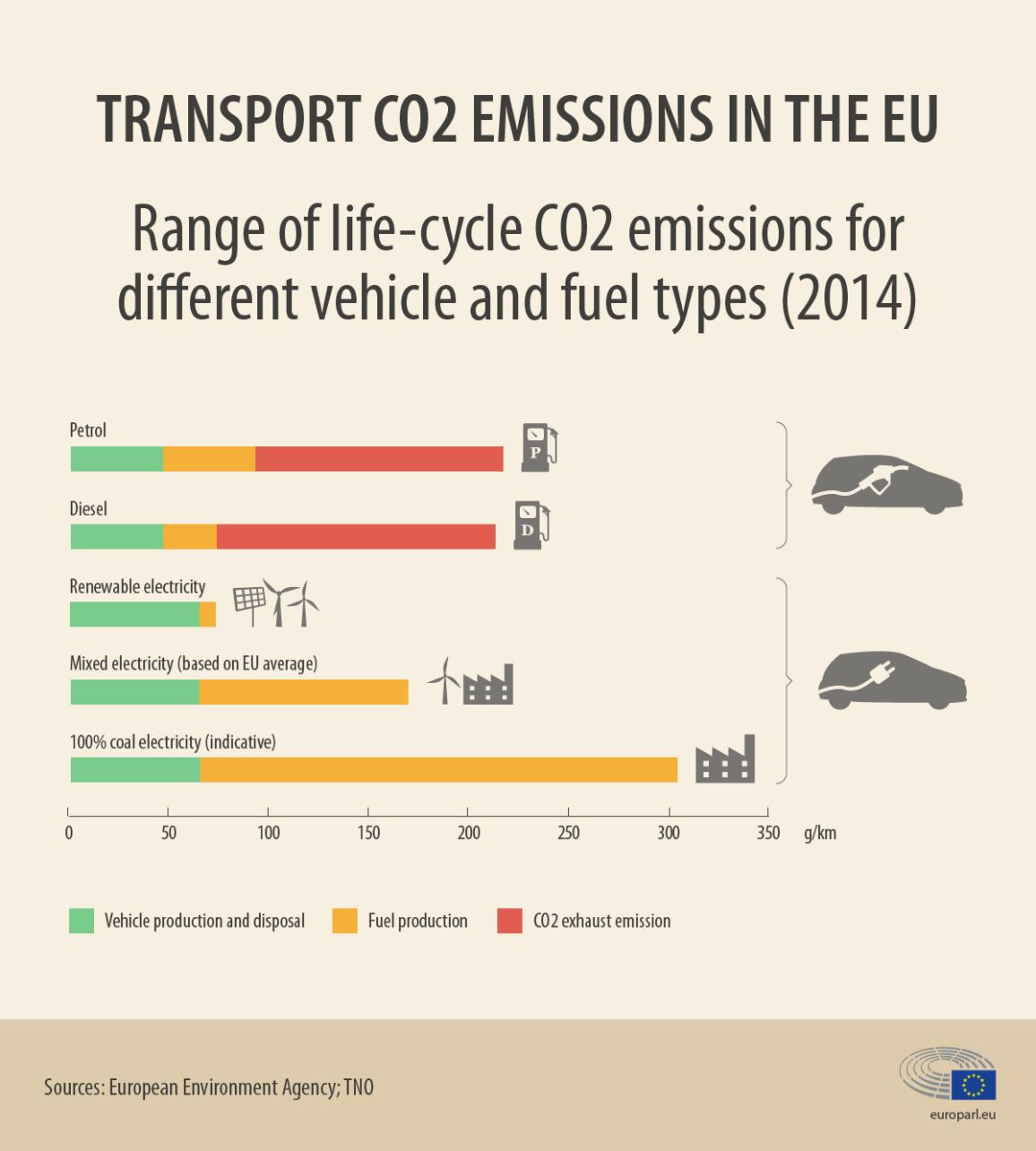 The green bars are the share from vehicle production. The top bar is a gasoline car, the second bar is a diesel car, and the last 3 are electric cars under different assumptions of clean power. Lifetime CO2 emissions are measured in g/km, assuming a 150,000 km mileage. This is about 93,000 miles for the Americans out there. Unfortunately I wasn’t able to find the primary source for this chart, but at a glance electric cars do pay a higher up-front cost in CO2 emissions. It’s 62.5g CO2/km versus 50g CO2/km, a 25% increase. However, this is later offset by the decreased emissions from power generation. The exact difference depends on how clean your electricity is. At the extreme ends, an electric car powered by electricity from coal is worse than a gasoline car! On average though, it looks good for the electric car, 170 g/km compared to 220 g/km for a gas car.

A 2018 brief from the International Council on Clean Transportation found similar conclusions. They compared an average conventional car, an efficient internal combustion car (the 2017 Peugeot 208, which gets 65.7 mpg), and an electric vehicle (the 2017 Nissan Leaf). The Nissan Leaf won out.

Electric vehicles should have larger gains than the ones shown here, because these numbers are based on a lifetime mileage of 93,000 miles. Most EVs I’ve looked at come with a 8 year, 100,000 mile warranty on their batteries. Power grid electricity is greener than burning gasoline, so underestimates of mileage are worse for electric cars when comparing their emissions.

Interestingly, for Germans, an electric car is only on par with an efficient gas car, since their power grid is more carbon heavy. For the French and Norwegians, it’s amazing, and this is part of the argument for electric vehicles I find most compelling: gas vehicles are forever locked into using gasoline, whereas electric vehicles will become greener over time as power grids move towards renewable energy. Electricity is inherently more fungible, it doesn’t matter where it comes from, and if more of the transportation network moves to electric, it reduces lock in of suboptimal technology.

We’ve now established that the obvious answer is the correct one: electric cars produce less CO2 over their lifetime. Now, used or new?

The three Rs go reduce, reuse, recycle, and that’s the order of priority. If you don’t need a car, that’s still the best, but reusing an old car offsets producing 1 new car. That immediately cuts your environmental impact by 25%-35%. Right?

Well, it depends how far you want to carry out the consequentialist chain. Say you buy a used car directly from someone else. That person likely needs a replacement car. If they replace it with a new car, then you haven’t changed anything. You still caused 1 new car to be manufactured, along with all the emissions that entails. In reality, not everyone will replace their car, so buying a used car is equivalent to producing some fraction of a new car. If that fraction is \(p\), then you save \(p\cdot 30\%\) of the emissions. But what’s \(p\)? Intuitively, \(p\) is probably close to 100%, since people need transportation, but is there a way we can estimate it?

As a simple model, let’s assume that everyone owns 0 or 1 car, and everyone acts identically. After someone sells their car, they have a XX% chance of not replacing it, a YY% chance of buying a new car, and a ZZ% chance of buying a used car from a third person. If the last case happens, that third person no longer has a car, and has the same choice of if and how they want to replace it. We can define the fraction of new cars (\(p\)) in a recursive way, where the first two cases are base cases.

Solving for \(p\) gives \(p = y/(1-z) = y / (x+y)\). In other words, it’s the number of new car sales, divided by (new cars + people who don’t replace their car). Counting new car sales is easy, because it directly affects revenue of automakers, and anything that affects revenue gets measured by everybody. Projections put it at 17.3 million new cars in 2018. Counting people who don’t replace their car is harder, but we can use numbers from the Bureau of Transportation Statistics. There are fluctuations between each year, but if we consider the 2013-2018 time span, the number of vehicle registrations increased by 18 million. So let’s say 3.6 million vehicle registrations per year. This is the net increase, so \(17.3-3.6 = 13.7\) million vehicles leave the road each year. Let’s treat 13.7 million as the number of cars that don’t get replaced. Then we get

This is a lot smaller than I expected, I thought it would be closer to 0.8 than 0.5. The Transportation Statistics numbers include aircraft and boats in their vehicle registrations, so I’m likely overestimating the denominator, meaning I’m underestimating \(p\). Let’s round up and say buying a used car leads to about 0.6 new cars. This saves 0.4 new cars of production, and you can expect a \(0.4 \cdot 30 = 12\%\) cut to environmental impact.

Combining it all together, even if you use the most efficient gas vehicle, and buy it used, you will struggle to do as good for the environment as buying a new electric vehicle. The ICCT brief estimates a 60+ mpg conventional car at 180 g CO2/km. Buying it used gives a 12% cut, to 158.4 g CO2/km. The same ICCT brief estimates electric vehicles at 130 g CO2/km, while the EU parliament infographic estimates them at 170 g CO2/km. Perhaps you’ll do better, but it won’t be by much.

California residents can expect their electric cars to be much better for the environment, thanks to more investment in green power. Other states may get smaller gains, but I estimate a 25%-50% reduction in lifetime CO2 emissions compared to a conventional car.

If you’re concerned about how regularly you can charge your car (like me), then you could consider a plug-in hybrid. These cars come with a smaller battery that lets them use electric power for short drives, then switch to hybrid mode (using gas) once that runs out. The CO2 emissions will depend on how diligent you are about charging the battery, but if your commute is short, it’ll be almost equivalent to a pure electric car with the option to fallback on gasoline.