I really, really like the Wasserstein GAN paper. I know it’s already gotten a lot of hype, but I feel like it could use more.

I also think the theory in the paper scared off a lot of people, which is a bit of a shame. This is my contribution to make the paper more accessible, while hopefully retaining the thrust of the argument.

Why Is This Paper Important?

There’s a giant firehose of machine learning papers - how do you decide which ones are worth reading closely?

For Wasserstein GAN, it was mostly compelling word of mouth.

Additionally, I buy the argument that GANs have close connections to actor-critic reinforcement learning. (See Pfau & Vinyals 2017.) RL is definitely one of my research interests. Also, GANs are taking over the world; I should probably keep an eye on GAN papers anyways.

At this point, you may want to download the paper yourself, especially if you want more of the theoretical details. To aid anyone who takes me up on this, the section names in this post will match the ones in the paper.

The paper begins with background on generative models.

When learning generative models, we assume the data we have comes from some unknown distribution \(P_r\). (The r stands for real.) We want to learn a distribution \(P_\theta\) that approximates \(P_r\), where \(\theta\) are the parameters of the distribution.

You can imagine two approaches for doing this.

The paper starts by explaining why the first approach runs into problems.

Given function \(P_\theta\), the MLE objective is

In the limit, this is equivalent to minimizing the KL-divergence \(KL(P_r \| P_\theta)\).

Aside: Why Is This True?

Recall that for continuous distributions \(P\) and \(Q\), the KL divergence is

(Derivations in order: limit of summation turns into integral, flip max to min by negating, add a constant that doesn’t depends on \(\theta\), and apply definition of KL divergence.)

To deal with this, we can add random noise to \(P_\theta\) when training the MLE. This ensures the distribution is defined everywhere. But now we introduce some error, and empirically people have needed to add a lot of random noise to make models train. That kind of sucks. Additionally, even if we learn a good density \(P_\theta\), it may be computationally expensive to sample from \(P_\theta\).

This motivates the latter approach, of learning a \(g_\theta\) (a generator) to transform a known distribution \(Z\). The other motivation is that it’s very easy to generate samples. Given a trained \(g_\theta\), simply sample random noise \(z \sim Z\), and evaluate \(g_\theta(z)\). (The downside of this approach is that we don’t explicitly know what \(P_\theta\), but in practice this isn’t that important.)

To train \(g_\theta\) (and by extension \(P_\theta\)), we need a measure of distance between distributions.

(Note: I will use metric, distance function, and divergence interchangeably. I know this isn’t technically accurate. In particular metric and divergence mean different things. I apologize in advance, the three are all heavily conflated in my head.)

We know we want to minimize \(d\), but how do we define \(d\)? This section compares various distances and their properties.

Now, I’ll be honest, my measure theory is pretty awful. And the paper immediately starts talking about compact metric sets, Borel subsets, and so forth. This is admirable from a theory standpoint. However, in machine learning, we’re usually working with functions that are “nice enough” (differentiable almost everywhere), and can therefore ignore many of the precise definitions without destroying the argument too much. As long as we aren’t doing any bullshit like the Cantor set, we’re good.

On to the distances at play.

Aside: What’s Up With The Earth Mover Definition?

The EM distance definition is a bit opaque. It took me a while to understand it, but I was very pleased once I did.

First, the intuitive goal of the EM distance. Probability distributions are defined by how much mass they put on each point. Imagine we started with distribution \(P_r\), and wanted to move mass around to change the distribution into \(P_g\). Moving mass \(m\) by distance \(d\) costs \(m\cdot d\) effort. The earth mover distance is the minimal effort we need to spend.

Every strategy for moving weight can be represented this way. But what properties does the plan need to satisfy to transform \(P_r\) into \(P_g\)?

Now, the paper introduces a simple example to argue why we should care about the Earth-Mover distance. 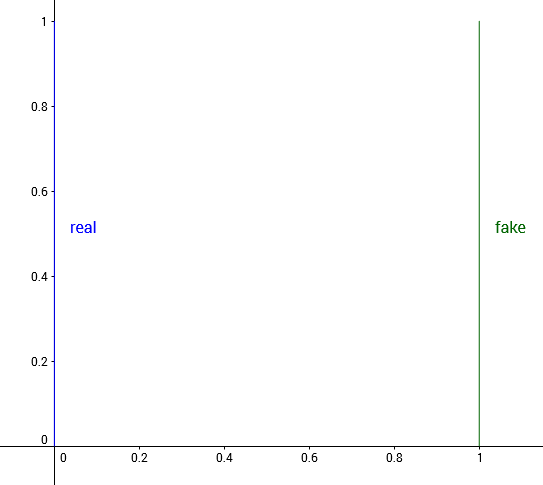 This example also shows that for the JS, KL, reverse KL, and TV divergence, there are cases where the gradient is always \(0\). This is especially damning from an optimization perspective - any approach that works by taking the gradient \(\nabla_\theta d(P_0, P_\theta)\) will fail in these cases.

Admittedly, this is a contrived example because the supports are disjoint, but the paper points out that when the supports are low dimensional manifolds in high dimensional space, it’s very easy for the intersection to be measure zero, which is enough to give similarly bad results.

This argument is then strengthened by the following theorem.

You’ll need to refer to the paper to see what “sufficiently nice” means, but for our purposes it’s enough to know that it’s satisfied for feedfoward networks that use standard nonlinearites. Thus, out of JS, KL, and Wassertstein distance, only the Wasserstein distance has guarantees of continuity and differentiability, which are both things you really want in a loss function.

The second theorem shows that not only does the Wasserstein distance give better guarantees, it’s also the weakest of the group.

Combined, this shows the Wasserstein distance is a compelling loss function for generative models.

The paper now shows how we can compute an approximation of this.

A result from Kantorovich-Rubinstein duality shows \(W\) is equivalent to

where the supremum is taken over all \(1\)-Lipschitz functions.

Aside: What Does Lipschitz Mean?

Intuitively, the slope of a \(K\)-Lipschitz function never exceeds \(K\), for a more general definition of slope.

For optimization purposes, we don’t even need to know what \(K\) is! It’s enough to know that it exists, and that it’s fixed throughout training process. Sure, gradients of \(W\) will be scaled by an unknown \(K\), but they’ll also be scaled by the learning rate \(\alpha\), so \(K\) will get absorbed into the hyperparam tuning.

The training process has now broken into three steps.

The full algorithm is below. 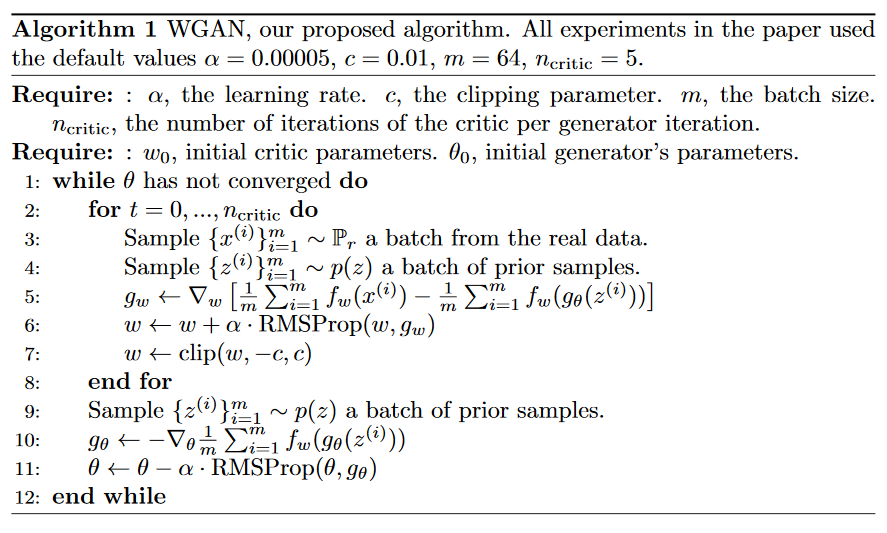 In WGANs, nothing requires \(f_w\) to output a probability. This explains why the authors tend to call \(f_w\) the critic instead of the discriminator - it’s not explicitly trying to classify inputs as real or fake.

In WGANs, it’s the Wasserstein distance instead. 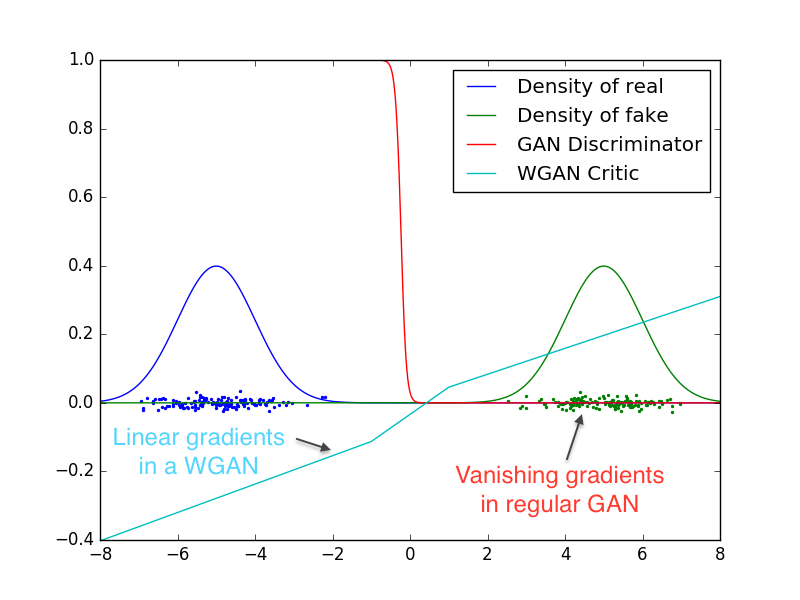 Both identify which distribution is real and which is fake, but the GAN discriminator does so in a way that makes gradients vanish over most of the space. In contrast, the weight clamping in WGAN gives a reasonably nice gradient over everything.

Next, the Wasserstein loss seems to correlate well with image quality. Here, the authors plot the loss curve over time, along with the generated samples. 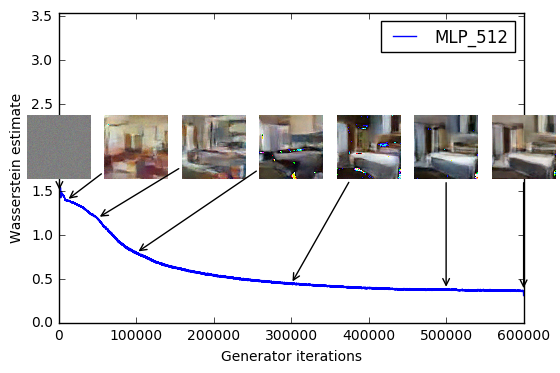 After reading through the paper, this isn’t too surprising. Since we’re training the critic \(f_w\) to convergence, these critic’s value should be good approximations of \(K \cdot W(P_r, P_\theta)\), where \(K\) is whatever the Lipschitz constant is. As argued before, a low \(W(P_r, P_\theta)\) means \(P_r\) and \(P_\theta\) are “close” to one another. It would be more surprising if the critic value didn’t correspond to visual similarity.

The image results also look quite good. Compared to the DCGAN baseline on the bedroom dataset, it performs about as well.

Finally, we make the generator a feedforward net instead of a convolutional one. This keeps the number of parameters the same, while removing the inductive bias from convolutional models. The WGAN samples are more detailed, and don’t mode collapse as much as standard GAN. In fact, they report never running into mode collapse at all for WGANs!

The read-through of the paper ends here. If you’re interested in the Related Work, or the theorem proofs in the Appendix, you’ll need to read the paper.

This is a rich enough paper to have several natural follow-up questions.

Given a fixed critic architecture and fixed \(c\) for clamping, can we quantitatively compare different generators by computing the Wasserstein estimate of both? Again, remember there’s an approximation error from optimizing over \(\{f_w: w \in \mathcal{W}\}\) instead of \(\{f: \|f\|_L \le K\}\), so we may not be able to do much. However, because we fix both the critic architecture and \(c\), the hope is that most of the error is some universal error that appears in all distributions. If the approximation error doesn’t change too much between distributions, this would give a way to judge generation quality without relying on Mechanical Turk. (And if the error does change a lot, it would probably be interesting to investigate when that happens.)

The constant \(K\) depends on both \(c\) and the model architecture, and therefore we can’t directly compare the critics between models with different architectures. Is there a way to estimate \(K\)? Recall the critic objective converges to \(K \cdot W(P_r, P_\theta)\), so dividing by \(K\) would normalize the difference between architectures.

How important is it to train the critic to convergence? A converged critic gives the most accurate gradient, but it takes more time. In settings where that’s impractical, can a simple alternating gradient scheme work?

What ideas from this work are applicable to actor-critic RL? At a first glance, I’m now very interested in investigating the magnitude of the actor gradients. If they tend to be very large or very small, we may have a similar saturation problem, and adding a Lipschitz bound through weight clamping could help.

These ideas apply not just to generative models, but to general distribution matching problems. Are there any low-hanging distribution matching problems that use the Jenson-Shannon or KL divergence instead of the Wasserstein distance? One example of this is the Generative Adversarial Imitation Learning paper. After a decent amount of theory, it derives a GAN-like algorithm for imitation learning. Switching the discriminator to a WGAN approach may give some straightforward wins.

← The Default Position Problem    We Have A Problem →