When ✈✈✈ Galactic Trendsetters ✈✈✈ did introductions this year, I realized with some surprise that this was my 5th time solving Mystery Hunt. Only my 2nd time flying in for Hunt though. Now that I’m a Real Adult with a Real Job, it’s harder to justify taking a few days off, but after five years I’ve hit a critical mass of MIT people I know and puzzle people I know.

If you want to avoid spoilers, you should stop reading now.

Let’s get some elephants out of the room first.

Was Hunt fun? Yes, absolutely. I loved the theme. The opening skit was great, the flavor was baked in all over the place, and overall it’s one of my favorite Hunts.

Was having a short Hunt a bad thing? I’m not so sure. WHOOSH Galactic Trendsetters NIERRRRR got 4th this year, which is a lot better than before. From what I heard, the team got bigger, people got better at looking at metas early, and the metas were easier to solve than previous years. Combined, that meant we finished by midday Saturday. Turns out you can do things on MLK weekend besides solve puzzles. I played some board games and party games, had a nice dinner, and got to work on Facebook Hacker Cup Round 1 at a reasonable time, instead of 4 AM. 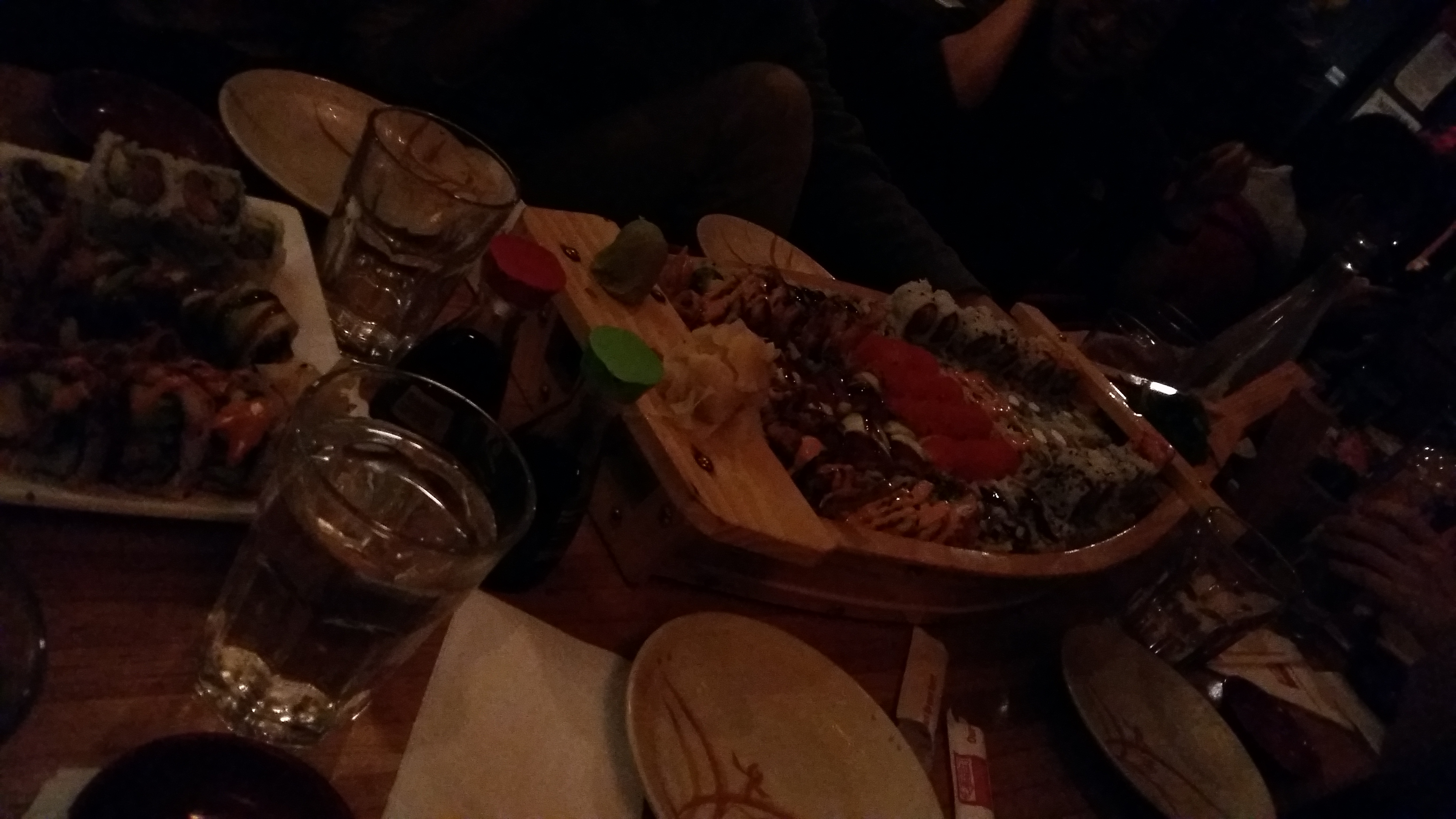 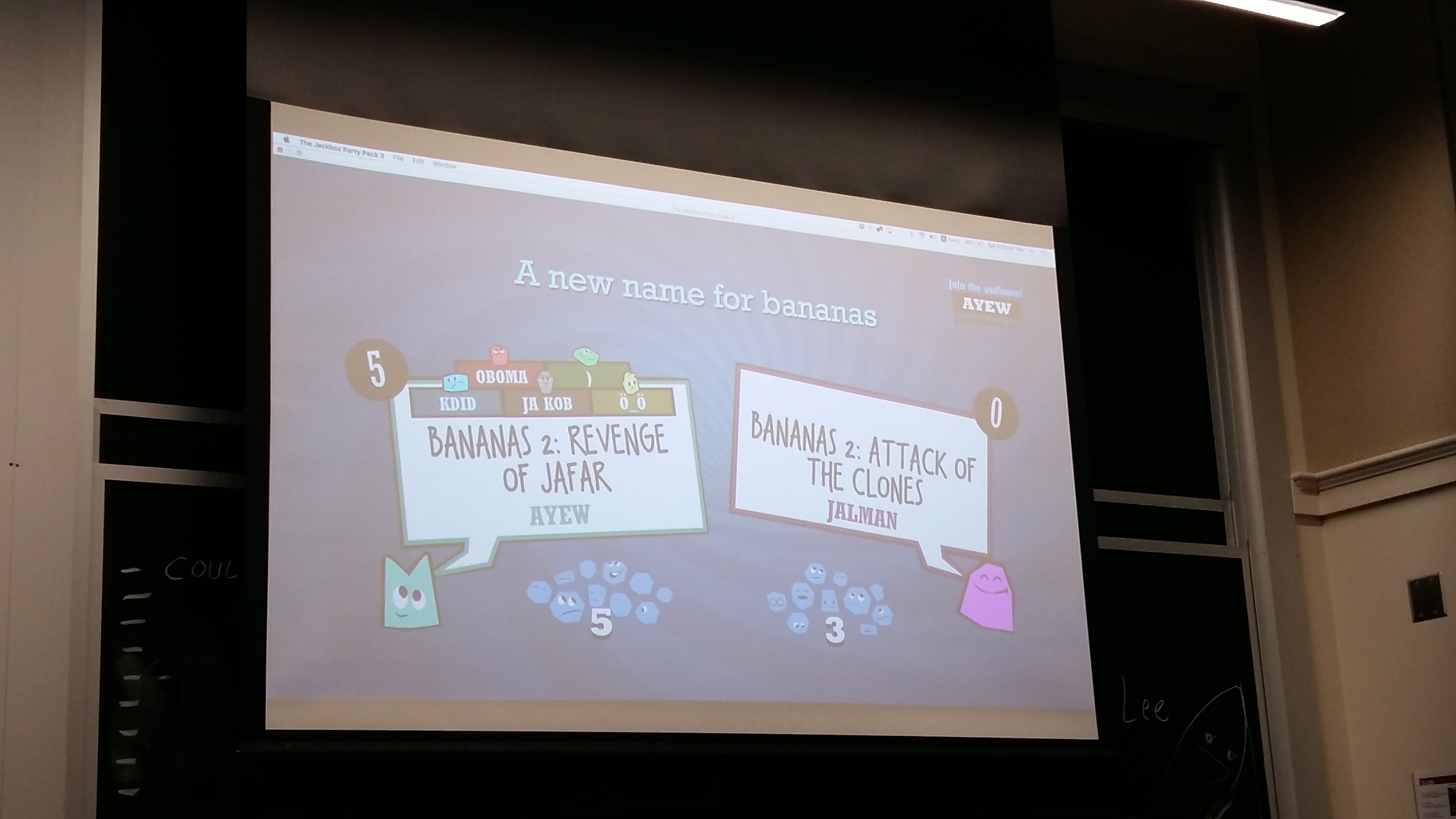 A game from Jackbox Party Pack 3

Yes, I can see how a short Hunt could be disappointing. Some people on our team arrived Saturday morning, and by that point we only had two metapuzzles left. On the flip side, running out of puzzles is a competitive team problem. There were several teams who got to finish Hunt for the first time, and that’s really awesome.

Look, time estimation is hard. I should know, I contributed to the Sages hunt. I place no blame at all on Setec for a short Hunt. Setec wrote good puzzles. In fact, in some ways they were almost too good. To me, getting good at puzzles is less about noticing the trick, and more about learning how to solve from 60% of the data, 10% of which might be wrong. I can’t do it, but some people are eerily good at solving past errors.

Neo: What are you trying to tell me? That I can identify extractions?

Morpheus: No, Neo. I’m trying to tell you that when you’re ready, you won’t have to. [Because you’ll solve metas by pulling random letters out of the puzzle answers.]

Hunts get longer when you have to figure out incredibly obtuse extraction mechanisms, and we didn’t hit as many of those this year.

I’ll sum it up like this. The metas were clued through tons of flavortext, which made them easier to solve. That led to more backsolving constraints, which made it easier to solve puzzles. That sped up the unlocking process, and it all cascades from there. At some point we had three Quest rounds open with zero solves in each, just because we’d been solving metas and Character puzzles so quickly. The Chemist meta and Cleric meta were especially open to backsolving, and because character levels were the main unlock mechanism, we backsolved those very aggressively. (A bit too aggressively in fact. HQ got mad at us and stopped confirming our Cleric backsolves for an hour. We’re sorry!)

I did like how clear the character level unlock mechanism was. It made it easy to decide which puzzles to prioritize. We never would have done the scavenger hunt if people hadn’t insisted we unlock Wizard level 6 already. I didn’t work on it myself, but it led to a scroll of the Bee Movie script, which was a glorious sight. 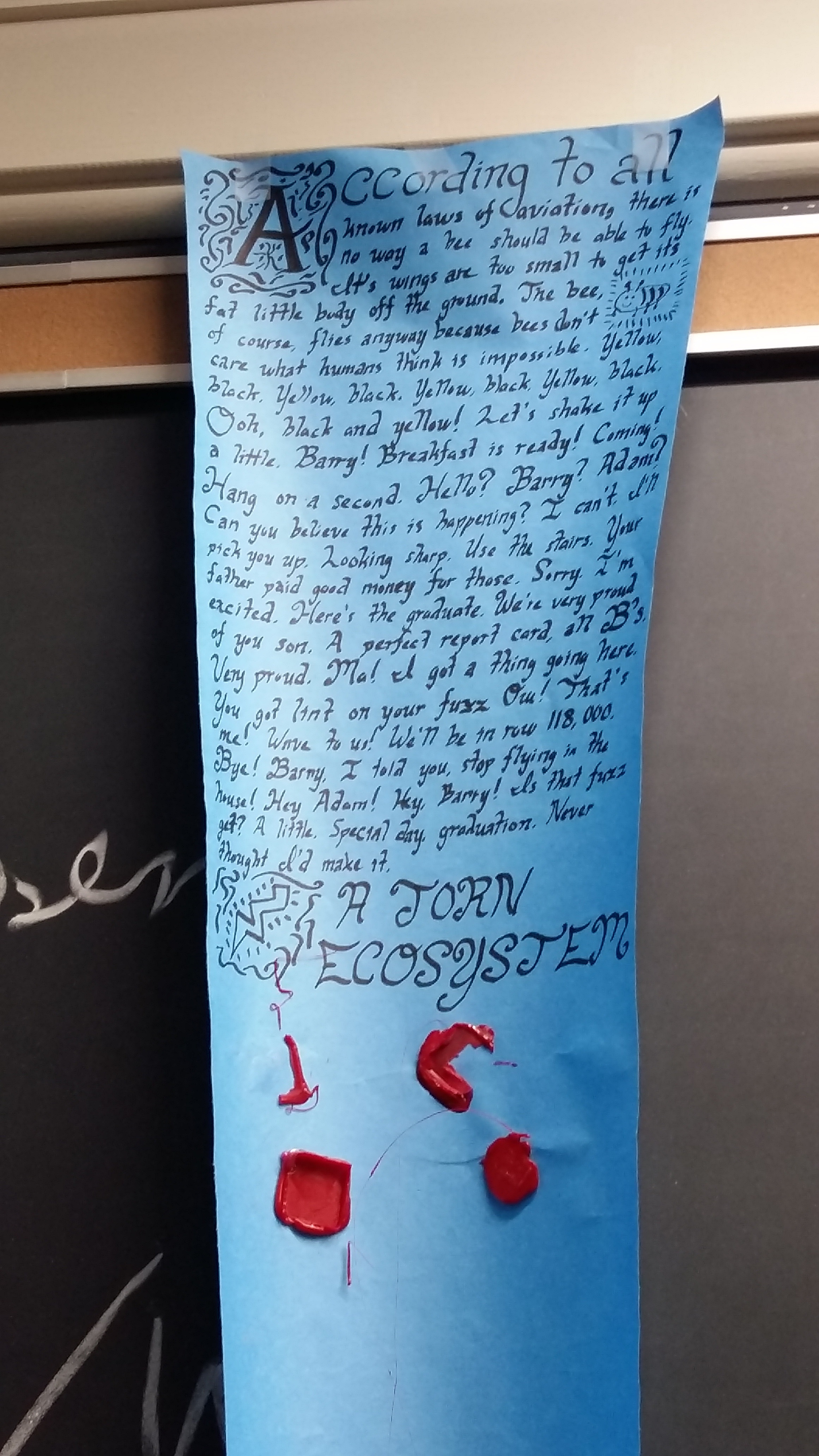 On to puzzle stories!

The first puzzle I was around all the way for was CHINA KILNS. The trick was really cute. We derped on assigning clues to answers properly, then we derped on solving the clue phrase, then we solved it.

By the time I looked at A Message From Our Sponsors, everything was IDed. Someone else got the aha. My main contribution was verifying the Poinsettia Bowl was indeed a thing.

When Pentoku came out, I loudly announced I wanted to work on a logic puzzle and people were free to join me. Then I left because about seven people started crowding around a blackboard, and I’m secretly not good at logic puzzles. Between the entire team, I’m pretty sure we solved each Pentoku twice, just because of communication issues between different rooms and the remote solvers.

I helped arrange the clues for A Lengthy Journey. This was shortly after we solved CHINA KILNS, so I was thinking we needed to make the answers form a cycle (each answer disambiguates a different clue, forming a cycle among clues.) We never realized that wasn’t what we were supposed to do. We ended Hunt with 9 puzzles unsolved, and this was one of them.

Fashionable Friends looked like fashion and so I skipped it. Someone pinged me about it later, saying it was a My Little Pony puzzle. I showed up and immediately identified the extraction mechanism, because of course cutie marks are going to be important in an MLP puzzle. I mean, duh! (It helps that last year’s MLP puzzle also used cutie mark extraction.)

I worked on Hamiltonian Path with a few other people. I let other people figure out the path constraints, and kept myself busy with identifying songs, because god damnit when else am I going to get to use my knowledge of Hamilton. I was very, very surprised that I could ID about 80% of the songs by memory, and only needed to look up lyrics for a few of them. Who knew 2-3 second snippets could be so distinctive? They were so distinctive that I didn’t even realize each clip had a number in it, which was really important for extraction. Oops. Anyways, after a very long time we got to GIVE US A VERSE, then got back a CD…and I realized I actually needed to make a team request for a laptop that had a CD player. Oh technology, you get obsoleted so quickly.

Mentally Stimulating Diversion was in fact a mentally stimulating diversion. It was a short one though, me and another person only spent about 40 minutes on it.

I did a dramatic reading of The Puzzle At The End of This Book around midnight on Friday. That was fun. We noticed all the encoded information during the dramatic reading, except for the encoding that gave SPECTER. I’m really disappointed we missed that mechanism, because it’s clearly the best one. (We did catch QALUPALIK, but it took us a while to believe that was a word.)

That was the last normal puzzle I looked at. After that I stared at metas for the rest of Hunt. 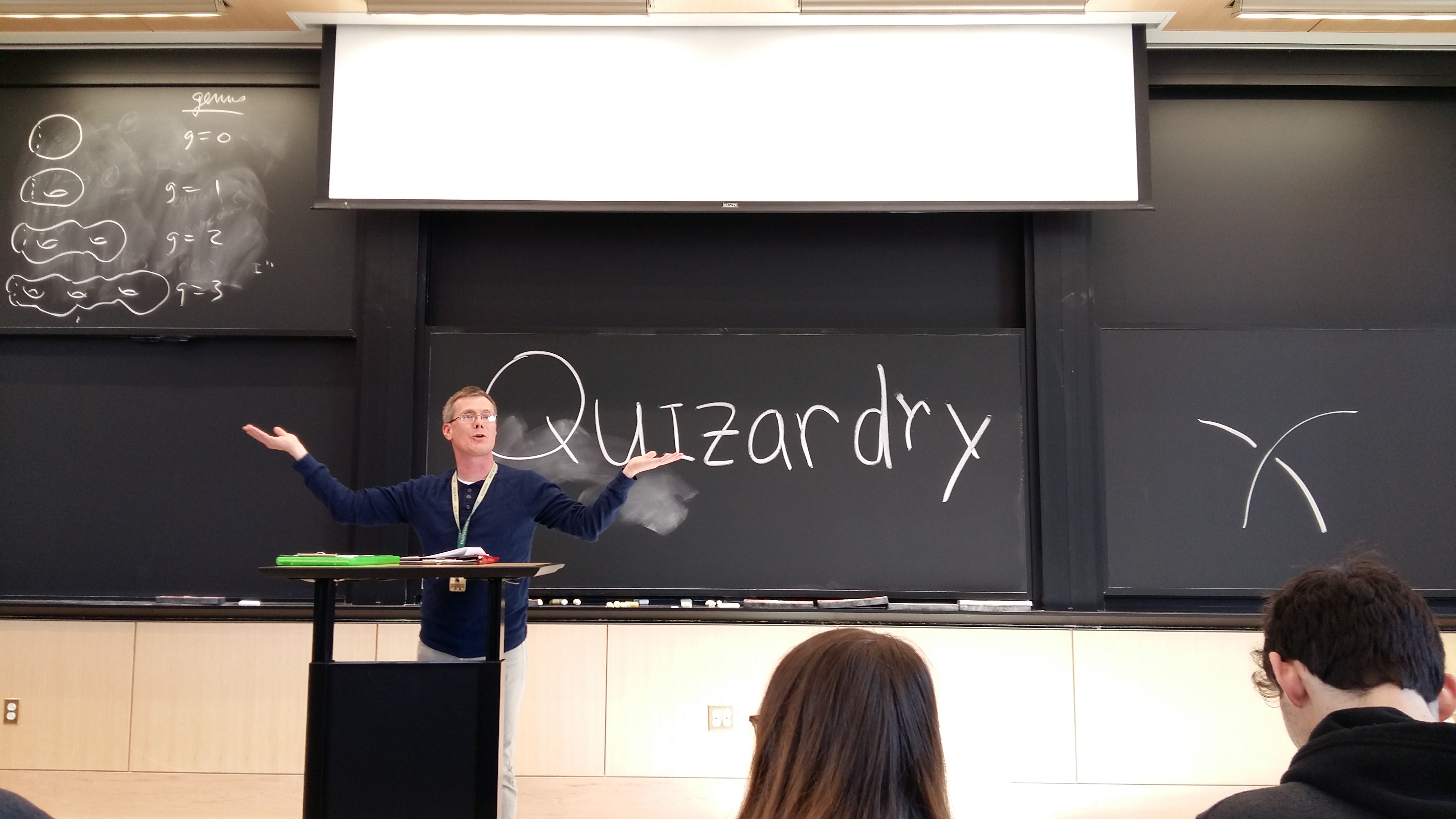 The one cute thing that happened was that we asked to hear only the category on the final round of Quizardry, then tried to figure out the correct answer purely from knowing it needed to be transformable into another valid answer in that category. I suppose we unintentionally spoiled the endgame gimmick for ourselves, because endgame worked exactly the safe way - identify something in a category whose phrase satisfies a constraint we learned from before.

So long, and thanks for all the puzzles!

← Introduction to the Hybrid Argument    Research Communication is Hard →