Two months ago, I was at a dinner where we started talking about character alignments. To explain why lawful-vs-chaotic was a different axis from good-vs-evil, we said “Umbridge is an example of Lawful Evil, and The Joker is an example of Chaotic Evil.” 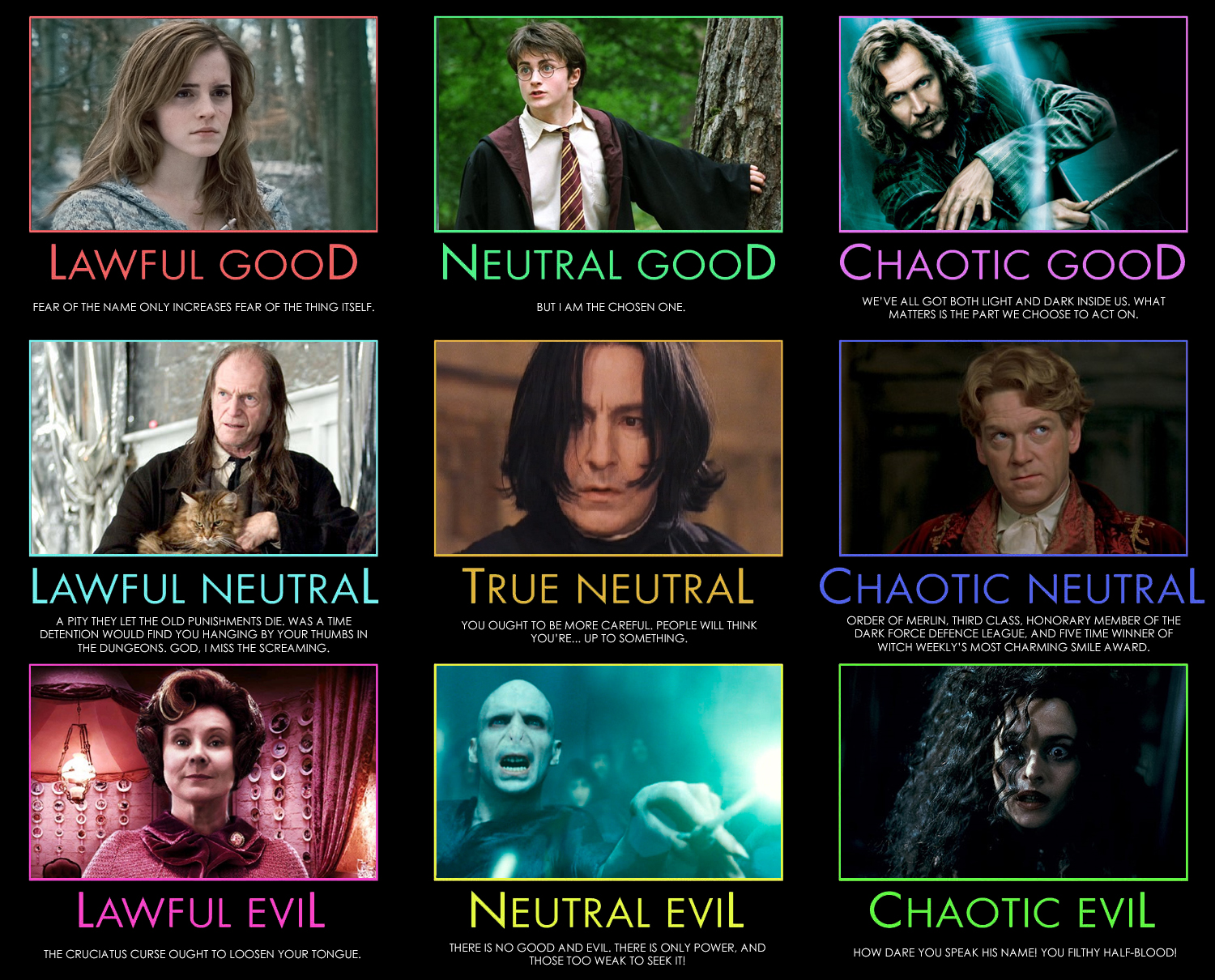 There’s nothing a good character alignment chart can’t add to.

A month after that, I was relaying a story about bigoted geniuses. A graduate student wrote a compiler which automatically inserted anti-Semitic messages into any code it compiled. This behavior was then hidden under several layers of code generation, making it especially difficult to remove the anti-Semitic messages while keeping the rest of the compiling ability intact.

In response, my friend quoted Ollivander.

(Harry Potter and the Sorcerer’s Stone. But you knew that already, didn’t you?)

I replied with this.

Thus, Harry Potter can be used as a compression algorithm for conversation. If you want to explain something that’s similar to something from Harry Potter, you can cite the relevant scenario/character, and people will usually follow you. And usually, this is much shorter than explaining it for yourself. The D&D Player Handbook spends two paragraphs explaining Lawful Evil, but in that dinner we explained it in a single sentence.

One of my classes this semester talked about impact evaluation. Paraphrased, the TA said, “In the ideal scenario, we would perform a study, measure results, use a Time-Turner, then don’t do the study and measure the difference between the two worlds.” This made me really happy, not just because it fit, but also because it validated my thoughts on Harry Potter compression.

(Although for the record, it doesn’t fit perfectly. Time-Turners only allow for stable time loops in canon. You wouldn’t be able to apply the study to the same group of people, because there is always only one timeline. Time-Turners would still eliminate a lot of confounding variables though.)

Now that I’ve thought about it, it seems obvious. Yes, this is how discourse works. People will use analogies to previous well known ideas to explain their points. I mean, no shit Sherlock.

Even when an idea is simple in retrospect, I still find it rewarding to think it through out loud. It elevates the idea from latent knowledge to common knowledge, and helps me identify it in other contexts. I just used a meme based off Sherlock Holmes, and I didn’t realize how much meaning I could pack into those three words until now.

(I have a lot more to write about this than I thought, so I’m stopping here. I may pick it up tomorrow, or I’ll save it from a longer post after the gauntlet is over.)