Let’s talk about work and play.

This is a theme that people absolutely love to bring up when talking about productivity. Here’s how the argument goes. People who do lots of work do because they like their work. They find ways to make work fun. The average employee goes to work to earn a paycheck, using that money to fund their play elsewhere. They work to live, instead of living to work. The mythical employee who treats their work as play lives for their work, because their work isn’t work; it’s play! That self-satisfaction drives them to work on side project after side project.

I’ll fully admit I’m strawmanning the argument by a bit. It’s not as though it’s unfounded. People who like their job will do more at their job. It’s obvious. People with big hobbies will spend time outside of work on those hobbies. They’ll take salsa lessons, or practice playing the piano. Maybe they’ll try organizing a roleplaying campaign.

What this portrayal misses is that even if you like your work, it’s still work. Someone can both deeply enjoy their job and deeply desire a break from it. And similarly, some hobbies require lots of effort as well. Learning to play the piano requires focused practice. Running a roleplaying campaign requires crafting a plausible setting, and learning how to improvise against the insane actions of roleplayers themselves.

If there is work and there is play, then for me blogging is semi-play. It’s nice, but it requires effort, and sometimes I’m too tired for that. If I’ve just worked for 12 hours, the last thing my brain wants to do is do more. I’m too tired to work, and I’m too tired to play.

It doesn’t matter that blogging is more personally fulfilling than being a passive consumer of other people’s work. Entertainment is entertaining! It’s made that way! Zero effort for a small blip of amusement. Welcome, dear children, to the fire hose of information. 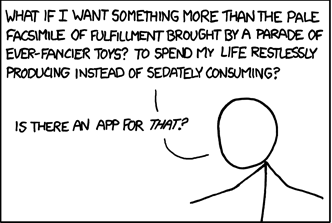 There is always a relevant xkcd

I don’t want to bash the entertainment industry that hard, because it would be hypocritical. This blog is a contributor to that fire hose, and I want people to drink from it.

I want to write more, but there’s this pressure to make the words I’m writing perfect and well-polished. To make every sentence a clean pearl, saying exactly what I mean in exactly as many words as I need. The issue is that it takes a long time to write in a polished way. The more polished I want something, the more effort that has to go into it. My standards for myself make blogging too daunting to do unless I have little else going on, and that’s not sustainable.

A few weeks ago, I had a conversation with somebody. She said it was nice to have a low effort writing outlet. That way, she could write down her passing thoughts, without worrying about making it perfect.

This challenge is a step towards making my blog take less effort. By requiring 500 words every day, I’m forced to lower my standards on what’s publishable and what isn’t. I won’t lie, that’s going to sting a bit. It doesn’t matter how many layers of self-deprecation I weave about myself, I care a lot about the quality of the things I produce. It’s natural to; in fact I’d say it’s incredibly strange not to. The end result of a well-edited most can be glorious to behold, but it’s a long journey to get there, and I find it less fun than the first step of turning my thoughts into words.

I’m treating this gauntlet as one small piece of my long term plan to get better at working towards long term plans. In the short term, my writing is going to be straight garbage. In the long term, I’ll be more articulate, and I’ll be better at understanding the power of taking small concrete steps towards lofty uncertain goals.