In Fall 2015, I took CS 276, a graduate level introduction to theoretical cryptography. For the final project, I gave a short presentation on secure computation.

This blog post is adapted and expanded from my presentation notes. The formal proofs of security rely on a lot of background knowledge, but the core ideas are very clean, and I believe anyone interested in theoretical computer science can understand them.

What is Secure Computation?

In secure computation, each party has some private data. They would like to learn the answer to a question based off everyone’s data. In voting, this is the majority opinion. In an auction, this is the winning bid. However, they also want to maintain as much privacy as possible. Voters want to keep their votes secret, and bidders don’t want to publicize how much they’re willing to pay.

More formally, there are \(n\) parties, the \(i\)th party has input \(x_i\), and everyone wants to know \(f(x_1, x_2, \cdots, x_n)\) for some function \(f\). The guiding question of secure computation is this: when can we securely compute functions on private inputs without leaking information about those inputs?

This post will focus on the two party case, showing that every function is securely computable with the right computational assumptions. 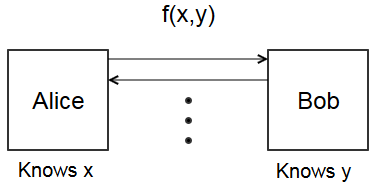 The classical example is Yao’s Millionaire Problem. Alice and Bob want to know who has more money. It’s socially unacceptable to brag about your wealth, so neither wants to say how much money they have. Let \(x\) be Alice’s wealth, and \(y\) be Bob’s wealth. Securely computing

lets Alice and Bob learn who is richer.

Before going any further, I should explain what security guarantees we’re aiming for. We’re going to make something secure against semi-honest adversaries, also known as honest-but-curious. In the semi-honest model, Alice and Bob never lie, following the specified protocol exactly. However, after the protocol, Alice and Bob will analyze the messages received to try to extract information about the other person’s input.

Assuming neither party lies is naive and doesn’t give a lot of security in real life. However, it’s still difficult to build a protocol that leaks no unnecessary information, even in this easier setting. Often, semi-honest protocols form a stepping stone towards the malicious case, where parties can lie. Explaining protocols that work for malicious adversaries is outside the scope of this post.

To prove a protocol is secure, we first need to define what security means. What makes secure computation hard is that Alice and Bob cannot trust each other. Every message can be analyzed for information later, so they have to be very careful in what they choose to send to one another.

Let’s make the problem easier. Suppose there was a trusted third party named Faith. With Faith, Alice and Bob could compute \(f(x,y)\) without directly communicating. 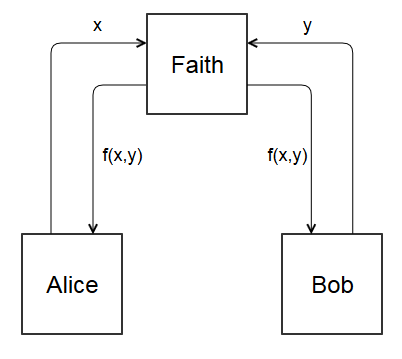 This is called the ideal world, because it represents the best case scenario. All communication goes through Faith, who never reveals the input she received. She only replies with what the parties want to know, \(f(x,y)\).

If this is the best case scenario, we should define security by how close we get to that best case. This gives the following.

To make this more precise, we need to analyze the ideal world’s security.

he learns Alice’s input \(x\). Even the ideal world can leak information. In an extreme case like this, possibly even the entire input! If Alice and Bob want to know \(f(x,y) = x + y\), they have to give up any hope of privacy.

This is an extreme example, but most functions leak something about each party. Going back to the millionaire’s problem, suppose Alice has \(10\) dollars and Bob has \(8\) dollars. They securely compute who has the most money, and learn Alice is richer. At this point,

However, there is still some privacy: neither knows the exact wealth of the other.

Since \(f(x,y)\) must be given to Alice and Bob, the best we can do is learn nothing more than what was learnable from \(f(x,y)\). This gives the final definition.1

Armed with a security definition, we can start constructing the protocol. Before doing so, we’ll need a few cryptographic assumptions.

All of theoretical cryptography rests on assuming some problems are harder than other problems. These problems form the cryptographic primitives, which can be used for constructing protocols.

For example, one cryptographic primitive is the one-way function. Abbreviated OWF, these functions are easy to compute, but hard to invert, where easy means “doable in polynomial time” and hard means “not doable in polynomial time.” Assuming OWFs exist, we can create secure encryption, pseudorandom number generators, and many other useful things.

No one has proved one-way functions exist, because proving that would prove \(P \neq NP\), and that’s, well, a really hard problem, to put it mildly. However, there are several functions that people believe to be one-way, which can be used in practice.

Oblivious transfer (abbreviated OT) is a special case of secure computation. Alice has two messages \(m_0, m_1\). Bob has a bit \(b\). We treat oblivious transfer as a black box method where

You can think of the OT box as a trusted third party, like Faith. Letting Alice send messages without knowing which message was received will be key to the secure computation protocol. I don’t want to get into the details of implementing OT with only Alice and Bob, since they aren’t that interesting. If you’re curious, Wikipedia has a good example based on RSA.

The above is part of the standard definition for symmetric encryption. For the proof, we’ll need one more property that’s less conventional.

With all that out of the way, we can finally start talking about the protocol itself.

Secure computation was first formally studied by Andrew Yao in the early 1980s. His introductory paper demonstrated protocols for a few examples, but did not prove every function was securely computable. That didn’t happen until 1986, with the construction of Yao’s garbled circuits.

For any function \(f(x,y)\), there is some circuit \(C\) such that \(C(x,y)\) gives the same output. That circuit \(C\) is made up of logic gates and wires connecting them. Each logic gate has two input wires and one output wire, and computes a simple Boolean function, like AND or OR. 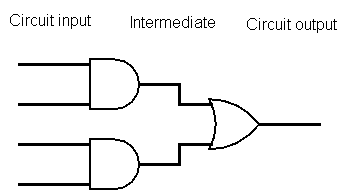 Here is a very obviously insecure protocol for computing \(f(x,y)\) 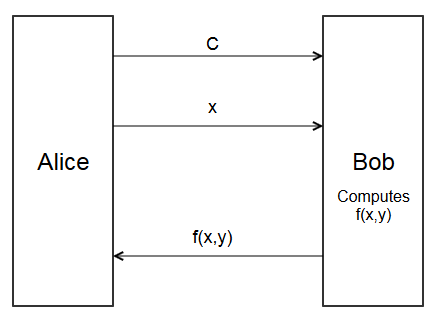 This is where garbling comes in. Instead of sending \(C\), Alice will send a garbled circuit \(G(C)\). Instead of sending \(x\), she’ll send \(x\) encoded in a certain way. It will be done such that Bob can evaluate \(G(C)\) with Alice’s encoded input, without learning what Alice’s original input \(x\) was, and without exposing any wire values except for the final output.2

A garbled circuit is made of garbled logic gates. Garbled gates act the same as regular logic gates, except they operate on the sampled encryption keys instead of bits.

Internally, an OR gate is implemented with transistors. However, at our level of abstraction we treat the OR gate as a black box. The only thing we care about is that it follows this behavior.

This is summarized in the function table below.

A garbled OR gate goes one step further.

By replacing every logic gate with a garbled gate, we can evaluate the circuit using random encryption keys instead of bits.

We implement this using symmetric encryption. For every possible pair of input keys, the correct output is encrypted using both those keys. Doing this for all possible inputs gives the garbled table,

(To be fully correct, we also shuffle the garbled table, to make sure the position of the decrypted message doesn’t leak anything.)

Thus, from Bob’s perspective, he’s evaluating the circuit by passing gibberish as input, propagating gibberish through the garbled gates, and getting gibberish out. He’s still doing the computation - he just has no idea what bits he’s actually looking at.

(The one minor detail left is key generation for the output wires of the circuit. Instead of generating random keys, Alice uses the raw bit \(0\) or \(1\), since Alice needs Bob to learn the circuit output.) 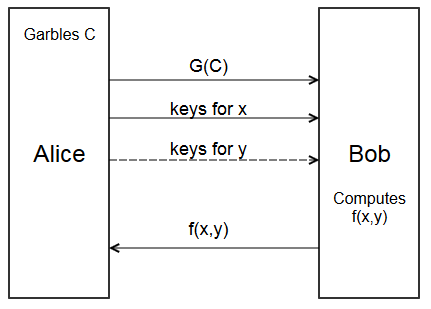 There’s still a problem. How does Bob get the input keys for \(y\)? Only Alice knows the keys created for each wire. Bob could give Alice his input \(y\) to get the right keys, but then Alice would learn \(y\).

One solution is to have Alice send both keys for each of \(y\)’s input wires to Bob. For each wire, Bob can then pick the key corresponding to the correct bit of \(y\). That way, Bob doesn’t have to give Alice \(y\), but can still run the circuit.

Thus, to be secure, Bob should only get to run the circuit on exactly \(x,y\). To do so, he needs to get the keys for \(y\), and only the keys for \(y\), without Alice learning which keys he wants. If only there was a way for Alice to obliviously transfer those keys… 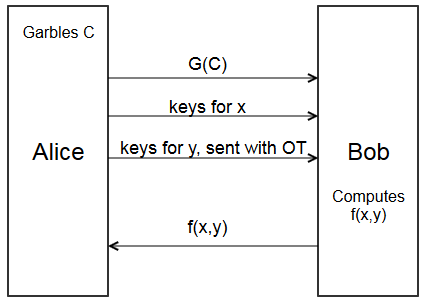 This lets Alice and Bob compute \(f(x,y)\) without leaking their information, and without trusted third parties.

This protocol is mostly a theoretical exercise. However, there has been recent work to make it fast enough for practical use. It’s still tricky to use, because the desired function needs to be converted into an equivalent circuit.

Despite this difficulty, Yao’s garbled circuits are still a very important foundational result. In a post-Snowden world, interest in cryptography is very high. There’s lots of use in designing protocols with decentralized trust, from Bitcoin to secure cloud storage. It’s all very interesting, and I’m sure something cool is just around the corner.

Thanks to the many who gave comments on drafts of this post.