Suppose you need to simulate an event that happens \(p = 1/4\) of the time, and all you have is a fair coin. Well, that’s easy enough. Flip the coin twice. Report success if you get 2 heads, and report failure otherwise.

a devilish upper bound, but things could be worse.

We’ll get back to the irrational case later.

Recall how we simulated \(p=1/4\). The scheme reports success only on HH. So, if the first flip lands tails, we can halt immediately, since whatever way the second coin lands, we will report failure anyways. The revised algorithm is

As another example, consider \(p = 1/5\). First, plan to flip 3 coins. Divide the 8 outcomes into 1 success case, 4 failure cases, and 3 retry cases. These can be distributed as

(Some of you may be getting flashbacks to prefix-free codes. If you haven’t seen those, don’t worry, they won’t show up in this post.)

With clever rearrangement, we can bundle outcomes of a given type under as few unique prefixes as possible. This gives some improvement for rational \(p\), but still does not let us simulate irrational \(p\). For this, we need to switch to a new framework.

I did not come up with this method - I discovered it from here. I wish I had come up with it, for reasons that will become clear.

Regardless of \(p\), it takes \(2\) expected flips for the coin to land heads. Thus, any biased coin can be simulated in \(2\) expected flips. This beats out the other scheme, works for all \(p\) instead of only rational \(p\), and best of all you can compute bits \(b_i\) lazily, making this implementable in real life and not just in theory.

Slick, right? This idea may have been obvious to you, but it certainly wasn’t to me. After thinking about the problem more, I eventually recreated a potential chain of reasoning to reach the same result.

This algorithm is correct as long as the decimals generated follow a uniform distribution over \([0, 1]\). I won’t prove this, but for an appeal to intuition: any two bit strings of length \(k\) are generated with the same probability \(1/2^k\), and the numbers these represent are evenly distributed over the interval \([0, 1]\). As \(k \to\infty\) this approaches a uniform distribution.

Assuming this all sounds reasonable, the algorithm works! Only, there is the small problem of flipping \(\infty\)-ly many coins. However, similarly to the \(p = 1/4\) case, we can stop coin flipping as soon as as it is guaranteed the number will fall in or out of \([0, p]\).

So, the algorithm halts unless the coin flip matches the \(1\) in \(p\)’s expansion. If it does not match, it succeeds. Consider what happens next. Starting from \(0.1\), there are 2 cases.

So, the algorithm halts unless the coin flip matches the \(0\) in \(p\)’s expansion. If it does not match, it fails. This gives the following algorithm.

Note this is essentially the same algorithm as mentioned above! The only difference is the ending condition. Instead of halting on heads, the algorithm halts if the random bit does not match the “true” bit. Both happen \(1/2\) the time, so the two algorithms are equivalent.

Here’s a sample run of the algorithm told in pictures. The green region represents the possible values of \(x\) as bits are generated. Initially, any \(x\) is possible. 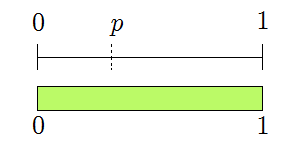 The first generated bit is \(0\), reducing the valid region to 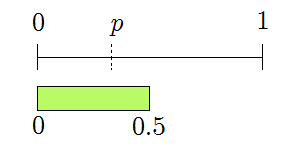 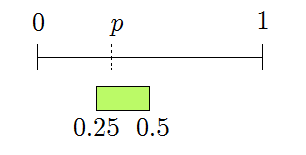 This still overlaps, so continue. The third bit is \(1\), giving 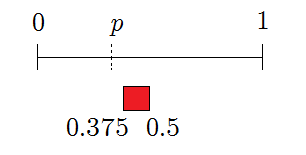 The feasible region for \(x\) no longer intersects \([0,p]\), so the algorithm reports failure.

This scheme is very, very efficient. But, is it the best we can do? Is there an algorithm that does better than \(2\) expected flips for general \(p\)?

It turns out that no, \(2\) expected flips is optimal. More surprisingly, the proof is not too bad.

For a given \(p\), any algorithm can be represented by a computation tree. That tree encodes whether the algorithm succeeds, fails, or continues, based on the next bit and all previously generated bits. 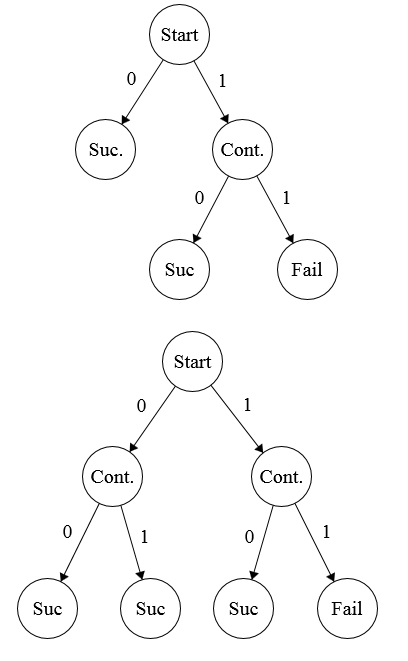 With the convention that the root is level \(0\), children of the root are level \(1\), and so on, let the weight of a node be \(1/2^{\text{level}}\). Equivalently, the weight is the probability the algorithm reaches that node.

To be correct, an algorithm must end at a success node with probability \(p\). Thus, the sum of weights for success nodes must be \(p\). For \(p\) with infinitely long binary expansions, we must have an infinitely deep computation tree. If the tree had finite depth \(d\), any leaf node weight would be a multiple of \(2^{-d}\), and the sum of success node weights would have at most \(d\) decimal places.

and as we have shown earlier, this lower bound is achievable. \(\blacksquare\)

(For \(p\) with finite binary expansions, you can do better than \(2\) expected flips. Proving the optimal bound for that is left as an exercise.)

Every coin in your wallet is now an arbitrarily biased bit generating machine that runs at proven-optimal efficiency. If you run into a bridge troll who demands you simulate several flips of a coin that lands heads \(1/\pi\) of the time, you’ll be ready. If you don’t, at least you know one more interesting thing.

← Things I Did In My Khan Academy Internship    Perfectly Intelligent Mafia →